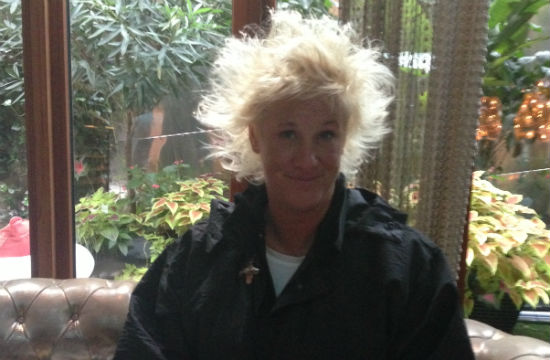 Anne Burrell, peroxide hair spiked out at least six inches, clad in a fireman’s jacket for a raincoat and polka dotted Crocs, stopped by The Braiser Media Lounge this afternoon and we grilled her on everything from her infamous salting technique, to participating in Charlie Trotter’s final dinner, to her graceful exit from the glass closet earlier this year. Check out our Q&A with Anne below!

The Braiser: I feel like you taught America what it truly means to season a dish on Worst Cooks in America. How do you feel about the heat you get from your competing mentors about over-salting?

Anne Burrell: I don’t over-salt. I mean, I don’t believe I over-salt, and any recipe I ever write, I don’t ever include a measurement for salt. Taste it and season to your palate.

Tell us about the last meal that you did at Charlie Trotter’s.

It was a really amazing occasion to be a part of. Charlie Trotter’s an icon, a true taste maker. When I was in culinary school, the book that you wanted to get was the Charlie Trotter book, and I remember paying fifty dollars for it. It might as well have been a million. I did not have any money, but to be there on his last night was really an honor and a piece of history.

Tell us what you’re doing at the Festival.

I did a demo today, and a book signing. I was a judge on Meatball Madness and Burger Bash. I was more obsessed with burgers than I was with meatballs. There were a lot of great burgers; not a ton of great meatballs.

How much do you get to hang out with other chefs at an event like this? Is it more about paling around with them or is it more for you about connecting with the fans?

It’s a little bit of both, but to me this is more about the fans, people that buy tickets and stuff. This is my job; this is what I do.

Is it weird to be hanging out with people that are paying to hang out with you?

No, I mean, it’s not like I hang out with them. I get my picture taken.

Is there an event you’re looking forward to going to?

My time at the Festival is done. I’m going to run by Tacos and Tequila for a minute, but I have to get on a plane tomorrow to go to Austin, Texas, because I’m starting to shoot Chef Wanted on a new set.

If you were going into a situation in which some evil government threatened to take away your show or brand unless you competed in a cooking contest of your choice, what would it be and how would you win? Kind of like The Hunger Games for celebrity chefs.

I would do Iron Chef. I’ve done so many Iron Chefs that I have a strategy already. It’s all about the use of the secret ingredient.

You are the network’s first publicly gay host of a single-personality cooking show. Do you feel like they’re sort of behind on the times in diversifying that or that it’s a coincidence?

There’s a portion of the queer community that feels like Food Network is purposely not highlighting queer chefs. Do you have any feelings about it, or do you feel like it shouldn’t matter and we shouldn’t even be talking about it?

Is there anybody you’re excited to see here?

I’ve seen just about everybody so far. I’m always happy to see everybody.