Anthony Bourdain On Egypt And The Arab Spring

How Anthony Bourdain May Have Contributed To The Arab Spring 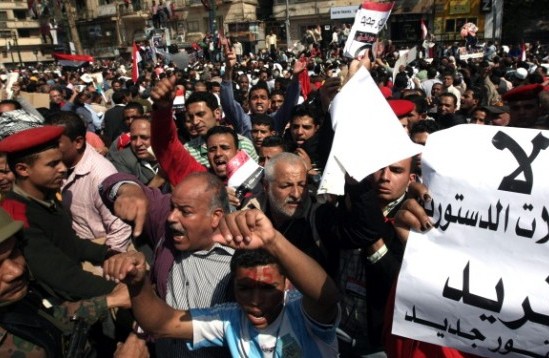 In San Antonio, while yukking it up and finding highly creative ways to tell Paula Deen to go f*** herself, Anthony Bourdain came back to a profound point: food — and the people who provide it — has power. It can bring people together, tell stories about their lives, and, in the case of his No Reservations episode in Egypt, incite a region into revolution.

It hit home for Bourdain in the midst of filming in Cairo. He wanted to film a segment featuring foul, the breakfast — and main meal — of many Egyptians. As the clip below shows, it’s a dish that includes seasoned fava beans and “a lot of bread.” His government-provided guides, however, were aghast:

“No, no, they said. This is not interesting; you don’t want see this,” he said of their guides, who  went so far as to forbid it and threatened to revoke filming permits and make them leave the country. So, one of the crew members feigned sickness as a distraction, and they were able to shoot the scene.

“Why were they so insistent? What was it that was so worrying to them?…It’s because they knew the show is broadcast all over the world, including in Egypt. This was prior to the revolution. The army owned all the bakeries and controlled the distribution of flour; there were bread wars.

“Not only is this the daily food of most Egyptians, it’s pretty much all most Egyptians eat every day. That’s it. A little bowl of beans and a big stack of bread,” he said. “They understood the power of this scene. They knew this show was beamed back to Egypt and they’d be watching, thinking, ‘That’s what we eat? We have a terrible government.’

“I’m not taking credit for the Arab Spring,” Bourdain amended, according to My San Antonio. “But I’m using this as a point of why food is important.” Indeed, the Mubarak regime fell three years after that episode of No Reservations aired, but Bourdain’s anecdote provides an interesting glimpse into the autocratic control Hosni Mubarak had over every aspect of Egyptian life. (Oh goodness, now we’re really excited for Bourdain’s CNN show.)

Here’s the clip in question: