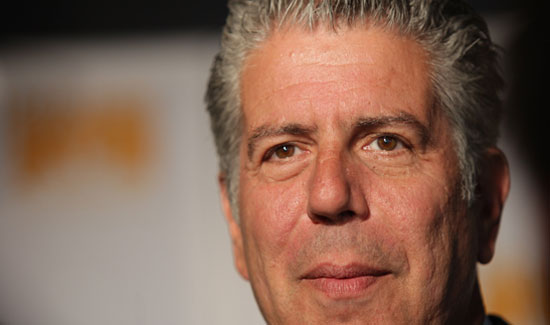 We would have been remiss to launch a site about chefs without getting some input from some of the biggest names in the biz. And who better to sit down with first than the ever-opinionated Anthony Bourdain, who spoke to us about the rise of the food celebrity, Rocco DiSpirito’s inability to run a successful restaurant, and why, against all odds, Emeril Lagasse found success on the Food Network. We’ve got part one of our interview below. Tune in tomorrow to read the rest.

Anthony Bourdain: Well, I think to a great extent, it’s a personality driven phenomenon. But I think the underlying engine is that we’re a new country growing up and catching up with those great parts of Europe, Latin America, and Asia, where food always was, you know, the social experience. We may seem food-obsessed now — possibly because there’s so much silliness associated with this rapid explosion of interest, and you know all of the seven deadly sins are all too apparent in this phenomenon — but what we’re really doing is that, in a very short period of time, we’ve gone from a country where we really didn’t think much about food, didn’t care where it came from, and didn’t care much about chefs, and now we think about it more and more — the way your average Vietnamese, Spaniard, and Italian has looked at food for a very long time.

Like any culture new to something, it’s a little awkward, a little dysfunctional. It’s a little out of proportion at times, but beneath it all, there’s never been a better time to eat in America.

Overall, yes. Even at its silliest, most hypocritical, most pretentious, or even at its worst, it’s still a good thing. I mean, pick anybody — just about anybody — on the Food Network doing really terrible work. Just the fact that people care about a cook or somebody cooking on TV is probably one for the “win” column.

Do you think it’s still possible for a chef to become a celebrity based solely on their food, or does it have to come hand in hand with press, with tv appearances, with a book deal, etc.?

I think it’s certainly true that a chef who is able to talk about themselves and what they do in a compelling way, who has some sort of presence on camera, and who can deal with the press, is at an advantage. But honestly, that was always the case. I mean, it was true of [Marie Antoine] Careme, who was a hustler, it was true of [François] Vatel, who was a super hustler, and [Georges Auguste] Escoffier — hustler. All of them were brands in their own right, all of whom probably had an advantage over their contemporaries.

But I think there are probably great chefs out there who achieved a lot of fame without a lot of skill on camera. Well, look at Emeril [Lagasse] — he’s the perfect example. Emeril was never really good on TV, it was the fact that he was so bad, that he was so kind of clumsy and endearing and awkward and I think that people like that about him.

It is ironic that of all of the professions, that chefs should be suddenly required or expected to speak on camera or [to] the press because most of them got into the business because they sensed in themselves an unfamiliarity, or an inadequacy, or that they were uncomfortable with communicating. It’s always been a business for misfits, but I think it probably attracted a lot of people who have always been pretty bad at communicating.

So, yes, I think it’s possible to become a celebrity chef without [press]. There are plenty of examples that have terrible communication skills: the surly, profane, and the semi-literate. There’s a spectacularly high number of chefs with reading disorders. I mean, Jamie Oliver, I believe, is dyslexic. I believe Marco Pierre White had problems in that area. A lot of chefs right now, you know, are just — they gravitated towards a field, a tactile profession, where they could do things with their hands and their senses because they didn’t feel comfortable talking.

So I think it’s possible. I also think that, for all of the delusional people who roll out of culinary school thinking that they’re gonna get into the business so that they can end up on TV, proportionately the same number of them will be washed out of the business by the heat, the pressure, and the actual requirements of the job. They won’t last.

Let’s say we use the term “celebrity chef” as sort of honorably as possible. If that was the ideal, who do you think most deserves the title?

Deserves? I mean, the first celebrity chef, the first true rockstar of celebrity chefs, was Marco Pierre White. There’s no doubt in my mind. You saw food and you saw Marco, and it was a game-changing moment of clarity. You realized, “Wow. I’m interested in this person, not just their food.” You think, “They’re cool, I want to be like them.” As far as a role model or an example for other chefs to aspire to, he was the first. He wasn’t a fat frenchman or an italian with a waxed ‘stache. All of that went out the window when you saw Marco.

In an ideal world, that’s what all celebrity chefs would be. And obviously in the world of the Food Network or the Cooking Channel, it’s not. Is there someone out there who least deserves that title?

Unless they’re on something like Top Chef or a competition show, a TV chef’s food doesn’t actually have to taste good. It’s about their presentation and what sort of character they are on television.

But if you look at Food Network, most of their presentation is pretty hideous. Would you call Rachael Ray a celebrity chef? I guess so, why not. But I would say this, I think she’s an example of, and I mean this in a flattering way, of someone who’s presentation doesn’t matter. People like Rachael, they want to spend time with her and if there’s food involved, great. I think there are certain people on Food Network that they’re people who you want to spend time with. I think with Emeril, when he was actually on the air, I’d be curious to know how many people actually cooked his food at home, or tried. Or did they just like hanging out with Emeril? I don’t know. I think you make good food and well-presented food and give out knowledge on Food Network at your peril, as I think Mario [Batali] found out.

On the flip side, what about someone like Rocco [DiSpirito] who is known to be a really good chef and came out of the gate with great reviews and a really strong restaurant, and in transitioning to becoming a celebrity, hasn’t been able to find any success in restaurants anymore? There appears to be a dichotomy between being a chef with a successful restaurant and being a chef who is a celebrity.

I can only guess that that’s not what Rocco wanted. Rocco wants to be famous. He wants to be a beloved public figure and television personality. And good luck to him. He clearly did not want to stay in the restaurant business. It’s clear. He didn’t want to stay in the kitchen. Fine. I think what I had a hard time getting past is that it’s too bad that such a great cook didn’t want for himself what I guess many of us who ate his food early on wanted for him. But I guess it’s as he said, “You shouldn’t hold it against him that he used to cook really well.”

What do you say? Top Chef is a great example. If you look at Harold Dieterle from Season One. Man, that guy rolled out of Top Chef and started opening really good restaurants. He didn’t swan around in the dining room, he tucked his head in, and used his post-Top Chef fame strategically but not obnoxiously. He opened up really good restaurants and he’s still working them. He’s not out there doing the circuit as a sort of ubiquitous personality D-lister, he’s a working chef who has got a lot of respect independent of the fact that he was on Top Chef. Whereas a lot of the other guys — are they even working? Do they even have restaurants? Or are they just floating around from demo to demo? I think that separates the chefs from the television personalities.

So, something like The Next Food Network Star, which revolves around literally creating a made-for-TV-chef, skills or no skills-

Right. That’s a petri dish. I mean, these people aren’t chefs. They’re just trying to grow these little brands in a petri dish. They create them, keep a percentage of the merchandise, their speaking gigs, their book deals, like, “Hey, we made you from a little spoor.” It’s clear. They don’t even bother to tell ‘em, “You gotta cook.” That’s pretty grotesque. I don’t think that’s a positive show. It’s an illuminating show. It’s a fascinating [look] into human and corporate behavior, not a flattering one. They’re not making chefs there.

To me, [the word] “chef” means nothing more than a cook who leads other cooks. So I think it’s worth defining the term. “Celebrity chef” to my way of thinking — and maybe it’s old school — presumes that you’re either currently running a kitchen, like a working, commercial kitchen, or you did recently, or at least for many years at some point in your life. If you’re a private cook, you are not a chef. Just ‘cause you make food on TV, you are not a chef. My threshold for use of that term, I think, is pretty low. I’m not saying you have to be a good cook to be a chef, it just means you’re a person who has or had a job leading cooks in a professional situation.

But it’s apparently a lot to ask if you look at the Food Network. And if you’re a member of the Screen Actors Guild, I think you pretty much gotta stop using the term chef.

In the second half of this interview, Bourdain shares more of his thoughts on the power of the Food Network, the allure of the “shit sandwich”, and whether the Golden Clog awards will ever make a comeback. Check it out here.