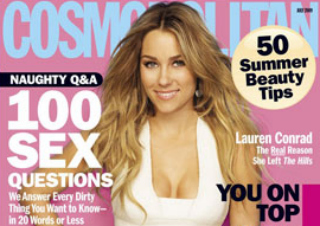 At first, we thought that maybe Ruth Bourdain was playing a cruel joke on us when we read this, but no. Anthony Bourdain did an interview for Cosmopolitan magazine and talked about the sexiness of sexy food. And then he wrote a slideshow called Five Ways You Can Please Your Man With A Lobe Of Foie Gras! Hah, no, he didn’t. But he was close.

At the very least, he did remind us that it’s sexiest to be an adventurous date, to boldly try new things, and to eat without worrying about your appearance. “I remember one of my first dates with my wife,” he recalled. “She ordered a six-pound lobster. I sat there, enraptured, watching her suck every bit of meat from it—she got a standing ovation from the floor staff.” (Years later, he would be in tears as she beat the living daylights out of him.)

PEACHES
They’re beautiful objects with so much flavor and juice. Damn sexy.

LOBSTER
Because eating with your hands is incredibly sensual.

What a sexy column of sexy sex, and by the way, how sexy is food? Sexy. What’s next, Bourdain? The Ten Best Exotic Foods To Use In The Bedroom? “Number Six: guess what you do with a geoduck“? Appearing in Cosmo is practically the opposite of Bourdain’s proclamations about sex (even the ones written in the article!), and is the furthest he could possibly go down The Road Of Selling Out. Beyond this point lies darkness, and soup cans with his face on them, and CBS sitcoms, and non-ironic appearances as a voice actor on My Litte Pony.

(To be fair, though, the new editor-in-chief, Joanna Coles, did want Cosmo to stop being completely about sex tips and “pleasing your man,” so this might be indicative of a more sex-positive, self-esteem-building message for women. We’ll believe it when we see it, Cosmo.)