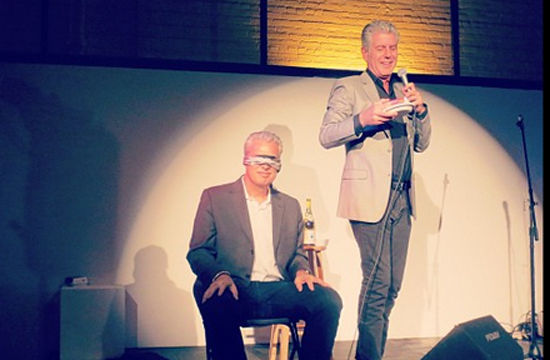 What’s the quickest way to raise money for charity? How about tricking your best friend into eating questionable meat products?  If lies + processed chicken = $$$, then Anthony Bourdain is freakin’ Warren Buffet, because he tricked Eric Ripert into eating a Chicken McNugget in order to both be mocked by an auditorium full of people and raise money for Hurricane Sandy relief.

At Shame On Sandy, a megastar dinner-slash-celebrity talent show, headliners Ripert and Bourdain managed to steal the show from everyone else (including Gail Simmons’ dramatic poetry reading, Mario Batali’s William Tell impersonation, and Sir Patrick Stewart’s monologue about a “mom-and-pop bistro” he discovered called Subway). Being the Best Friends That They Are, the two had a blindfolded taste test contest on stage, in which they attempted to identify, using only their palate, what their Best Friend made them eat.

Ripert, ever the Frenchman, asked Bourdain to identify whether he was drinking a red or white wine, and surprisingly, Bourdain could — even going so far as to ID the grapes used in each wine. In return, Bourdain, ever the degenerate, set two items in front of Ripert. As The Daily Meal recapped:

After reaching into a bowl and sampling the first item, Ripert admitted that he had no idea what he was eating. “There is crystallized sugar, and it tastes a little like cotton candy,” he said. Bourdain then told him that he was eating Captain Crunch, and asked him, “How can you smoke marijuana and not know what Captain Crunch is?”

“I have no recollection,” Ripert coyly replied.

And then this happened:

Somehow, only Anthony Bourdain could mix generous philanthropy with being a sadistic fucker, but it worked: the event raised $42,150, which will be donated to the Mayor’s Fund to Advance New York City. The next charity event will raise money to help Ripert get over his PTSD, or palate traumatic stress disorder, from this tragedy.