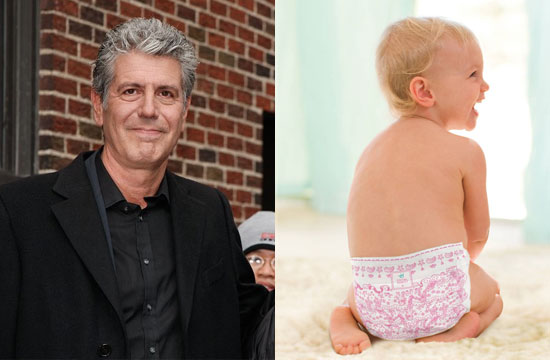 In the midst of rage-tweeting a travel nightmare at American Airlines, as he does, Anthony Bourdain discovered that his flight delay had occurred not just because of corporate incompetence, but rather corporal incontinence. Shameful Carrie Bradshaw puns aside, this is the story of what happened when someone pooped their pants on a plane and made Anthony Bourdain miss a flight.

The cranky cook even visited the panini bar to wait for his flight when he found out what was causing the delay. He also sarcastically wrote, “But I had timed my airport margaritas and Valium for a timely departure.”

After two hours of waiting, Bourdain heard the surprising reason for the delay.

“Latest news is it took #AA two hours to admit a passenger dropped a wet deuce on a seat. Need to change planes,” he wrote.

As he continued to wait, Bourdain compared his situation to the seminal postmodern play Waiting For Godot. We would be inclined to agree:

An airport lounge. A plane.

PILOT: We’re waiting for the plane.

BOURDAIN: The plane, it’s right there. Do you see any others?

PILOT: Of course not. But we can’t fly on it, because it’s covered in poop.

BOURDAIN: Ah. (He ponders) No one told me that.

BOURDAIN: Is there any other kind?

PILOT: (winding up) In the modern taxonomy of the kingdom animalia, there have been organisms known to not only consume organic and inorganic material, but also extrude them from their bodily orifices…

BOURDAIN: (hurriedly cutting him off) Okay, okay, I get it, whatever. I’m going to tweet about this.