REVIEW: Anthony Bourdain’s Get Jiro! Is Decadent And Depraved And We Loved It 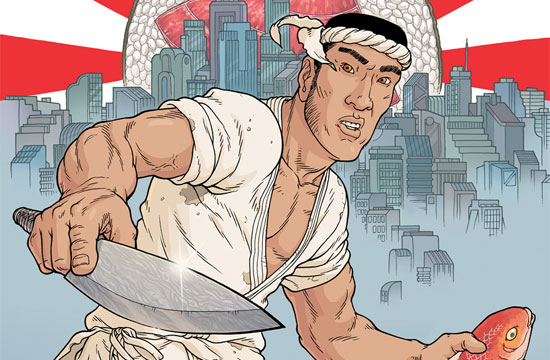 Not tasteful as in “non-offensive to the senses,” though. Tasteful as in “all the food in this book looks tasty, and I mean, seriously fucking tasty,” despite the fact that there is a drawing of a decapitated man with his bloody guts lying in a pile of filth on the next page.

If, after you have read that sentence, you still feel insatiable hunger — for the delicately-inked whorls of roasted baby eels and pot au feu, for the unctuous gradients of foie gras, for the finely rendered, blood-spattered rictus of that severed head on its side, ear mashed into the pavement — then you will be just dandy reading this book, which Bourdain co-authored with Joel Rose. For those not familiar with Mr. Rose, here is a brief selection of his work: Kill the Poor, Kill Kill Faster Faster, and my favorite graphic novel, A History Of Violence. Did I mention that this was a violent book?

Anyone who’s been on the internet in the past few months knows the premise by now: in the future, every other form of entertainment has died, except for restaurants (and porn). This premise makes future food in Los Angeles very, very good. More importantly, that makes chefs “the new power,” as Bourdain declares early on in the book, but really, violence and desire rule the dystopia of Get Jiro!. The chefs are simply the conduits, and two philosophies of desire take form in two powerful chef-evangelists: Rose, the militant locavore hippie whose rake-wielding followers don’t remember their cause of the day, and the corporate, “technovore” Bob, ruthlessly building a restaurant empire in order to finance places where he can cook rare orlotans and $4000 bags of baby eels.

Then there’s the third philosophy: that food should just be enjoyed, for no reason and for no purpose other than itself. That’s where Jiro comes in, quietly setting up a small sushi bar in a strip mall where he makes the best goddamned sushi anyone in LA has tasted — so good, in fact, that two cops shrug when they come across the dead body of a man who offended Jiro by asking for a California roll. “You know,” says one, “the rice here is exquisite.”

In true spaghetti western style, the two warring chef gangs try to woo the mysterious Chef With No Name (okay, yes, he’s named, but the similarities to the main characters of Yojimbo and the Dollars trilogy place Jiro squarely in that category), while everyone else — a cantankerous Vietnamese man, a jolly chef named Jacques in a hidden restaurant, a seemingly simple taco cart owner — chafes under their control. Character development? Nah. The way I’ve described the colorful cast thus far is as deep as the comic gets into their heads. But then again, Get Jiro doesn’t need it, shoving characterization out of the way to pit these archetypes into an all-out war, sparked by Jiro’s double-crossing.

If you’ve seen those films, you have a good idea of how Get Jiro! ends. But whereas Clint Eastwood killed an entire town for money, Jiro simply wants to make sushi and serve it his way. And that difference captures exactly what this entire lurid, bloody, mouthwatering affair is based on: for all the crazy and obsession and bloggers and gluttony attached to food culture he deftly satirizes, Bourdain believes strongly that food is not just good, it is a good; something that people should aspire to make and eat well. Given the zealous belief his characters hold in this principle, the idea of someone slicing a man’s throat for serving a caprese salad in the winter makes complete sense.

The satire, however, doesn’t carry so much in the writing as it does in the visuals: Langdon Foss’s exaggerated realism, usually illustrating fantasy worlds and mental hells, works perfectly for the monomaniacally food obsessed citizens of future Los Angeles — the effect being that these violent, cartoonish motherfuckers are eerily familiar to us. And whoever was responsible for the visual jokes liberally scattered throughout the pages — Rose demanding obedience via a Shepard Fairey poster, obese denizens lolling in food-printed t-shirts, Jiro being taken down via a “Bro Taze” — did well by the story.

Needless to say, the food is beautifully rendered by Foss and colorist Jose Villarrubia, for without that, the book would fail — no one, not even a cartoon character, would wantonly murder a sushi diner for the sake of a poorly drawn, poorly colored pink rectangle with white lines running through it.  But when you see a man prepare a pig’s blood sausage and somehow it looks delicious, that one pinpoint of belief centers the craziness that spins wildly around it. And hey, if you ended up hating the book, at least Bourdain taught you how to make a pot au feu.

But you wouldn’t hate this book, would you? If you’re a reader of this site, you’re already obsessed with the food world, and this is the violent id of every other fictional culinary tale out there. Self-aware, guilt-inducing and deliriously fun, Get Jiro! manages to satirize a food-obsessed culture, while precisely understanding the desire that sparks that obsession.

Get Jiro! is available on Amazon.com and in bookstores everywhere.