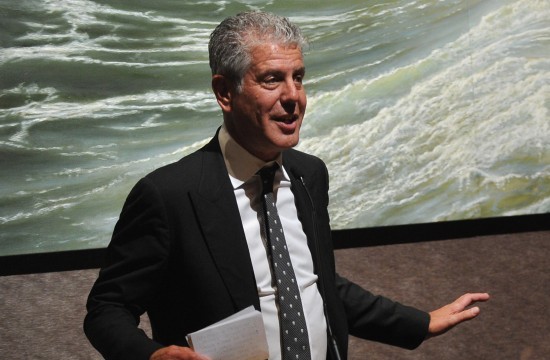 Anthony Bourdain’s interview in the latest issue of Rolling Stone  is a textbook example of why we’re so obsessed with everything he says. His patented method seems to be: string words together in a hilarious pattern, tie them in a bow of social commentary, and then throw them at a target (and cackle as they burrrrrrrrn). This time around, Bourdain deviates from his traditional “Food Network host/locavore” targets and, instead, offers up a few ridiculous observations that are pure, irreverent gold.

1) Bourdain gets all of his breaking news via Twitter, and learned about Libyan dictator Muammar Gaddafi‘s death in 2011 via the oddball/awesome account @DRUNKHULK, which is exactly what it sounds like. Normally, we’d knock him for not watching Real News Like The Rest Of us, except that we can’t, for these three reasons. First, modern media is in a frightening state of existence. Secondly, he was part of a vast sociological trend where thousands of people learned about Gaddafi’s death via DRUNK HULK’s tweet.  And finally, we’re smothered in news at The Braiser, thanks to these bastards at the next desk over.

2) For all of her Southern charm, Paula Deen has some fanatic fans. When Bourdain suggested a year ago that Deen’s advocacy of her lifestyle was “dangerous for you,” he received a deluge of mail and Facebook messages that he would only characterize as “scary.” “It was the first time that I’d ever been frightened,” he admitted.

3) Bourdain throws the term “foodie” into the category of Overtly Trendy Things No One Wants To Be Called. “‘Foodie’ is now like ‘hipster’, and no one wants to be accused of being a hipster, although many of us swim in the same pool. It’s been suggested that ‘gurgitator’ would be a better word.”

The June issue of Rolling Stone is on newsstands now.