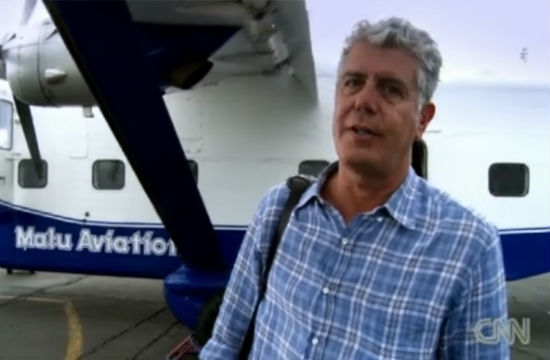 Anthony Bourdain has hard opinions on just about everything, which is one of the reasons we like him so much. This week, Bon Appétit published an interview with him where he talked a lot about food, particularly with regard to travel. Here are some things we learned from Bourdain:

1. Don’t bring food on a plane- unless you want to be “the most despised person in the cabin.”

He once brought food from Joe’s BBQ in Kansas City onto a plane, and “the look of pure loathing on everyone’s faces” isn’t something he would want to have happen again.

2. But don’t ever eat plane food either.

He says, “No one has ever felt better after eating plane food. I think people only eat it because they’re bored. I don’t eat on planes. I like to arrive hungry.” Fair point. Eating plane food is always a bummer. That may change soon, but that’s a different conversation. It’s always better to get to a new place ready to try new foods.

4. When you’re traveling, don’t get a drink at your hotel.

“Find out where the people who work at your hotel do their drinking.”

5. And, don’t order room service either.

With the exception of breakfast, don’t order food to your hotel room. “If you really want to send yourself into a tragic spiral of depression, call down for a room service hamburger when you’re alone in your room. You will inevitably be disappointed and more than likely sent into a manic-depressive state for days.”

Good advice no matter where you are.

Watch This Video of Anthony Bourdain on the Beach in Greece, and Then Cry about How Much Your Life Sucks