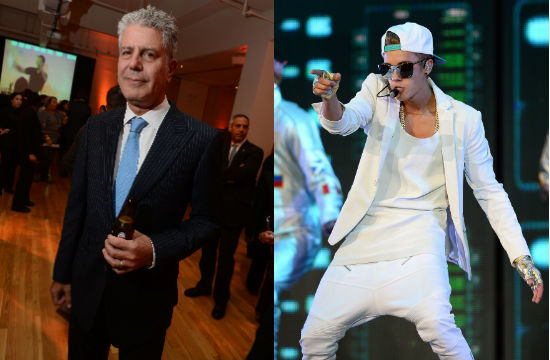 Uh, we don’t know if you knew, but Justin Bieber was videotaped being “an oblivious, self-important little twit” in the wee hours of this morning, relieving himself in a restaurant’s kitchen mop bucket instead of in the bathroom, like normal people, because he was raised by Usher. This is what happens when you’re raised by Usher. (No offense to Usher intended.)

Of all people, perhaps because he senses the impending obsessive tweendom about to befall his little angel, Anthony Bourdain took to Twitter to expel his Bieber aggression on the record. Observe:

The chef should have put his foot up this young punk’s ass:
http://t.co/JyqSNoEKEP
“My dishwasher ain’t cleaning that up, squirrel balls!

In a preemptive strike, I plan to tell my daughter that Justin Beiber tortures puppies. http://t.co/JyqSNoEKEP

Looking forward to seeing him open for Menudo at the State Fair— in about ten years. http://t.co/FjPfgSelET

Ottavia actually got in on it, too, suggesting she’d help Ariane hide the body if she ever decided to kidnap Biebs and torture him in the basement, prompting a crazy Belieber fan-mom to threaten to report Mrs. Bourdain to the police. Twitter was a weird place today, you guys.

We’re still confused about the “Fuck Bill Clinton” epithet at the end of the J-Biebz video. Why you gotta hate on Billiam? Clinton-era America MADE YOU.