Anthony Bourdain Interview | Why I Did The Taste

Anthony Bourdain: Being On The Taste Was Like Flying A Fighter Jet 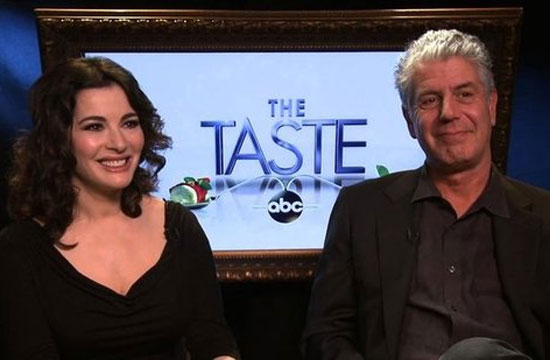 We love it when Andrew Zimmern and Anthony Bourdain hang out for media purposes, because it’s just so casual and real and yet somehow revelatory. Also, because they’re practically personality clones of each other. Zimmern just interviewed with his alternate universe twin for Delta Magazine, and asked Bourdain, among other things, the question we all asked ourselves: WTF was with that thing about being on The Taste?

Contrary to the many assertions that he sold out big time, Bourdain thinks that going on the show was actually in keeping with his own subversive character. “I really did come to a point where I thought the most subversive thing I could possibly do was a big, noisy competitive reality show on a Disney‑owned channel,” he admitted. “It’s deeply terrifying to me to do such a thing. I’ve never tried anything like that before.”

Which, really, is a long way of saying that he loves Nigella Lawson and her beautiful soul and would do anything to be closer to her radiant bosoms:

I love the idea of working with Nigella [Lawson]. Particularly, I love the idea that people—I’m sure people will be surprised that we are, in fact, friends of longstanding. I like relationships and collaborations with people who are very different than me. Nigella and I are executive producers of the show. We had a lot of input very early on in the shaping of it. I knew there were going to be a lot of fans who were going to say, “Oh, dude, I liked you—you sold out. I liked you better when you were an indie.”. . . But I don’t want people to feel comfortable in their assumptions of what I’m going to do next. I don’t mind cutting off my own nose to spite my face. I don’t mind poking people in the eye.

And if he failed — so what?

It’s like somebody says to you, “Hey, come onto my aircraft carrier. Look, it’s an F4 Tomcat! Here are the keys.” Now, I’m pretty sure I can’t fly an F4 Tomcat, and I’m pretty sure also that flying one off the deck of a moving aircraft carrier, much less trying to land again, is a pretty bad idea. It might well end in death. But on the other hand, somebody just gave me the keys to an F4 f***ing Tomcat.