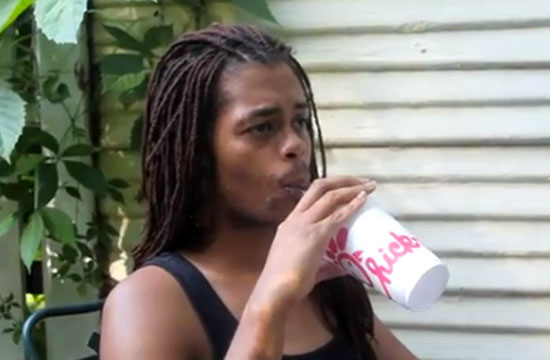 Put this one in the “We weren’t expecting this endorsement at all” category: Antoine Dodson, the openly gay star of 2010’s megaviral Bed Intruder video, recently released a video in which he joins Rick Santorum and Mike Huckabee in supporting the act of eating at Chick-fil-A.

“A lot of people from the gay community have been coming to me and telling me that I shouldn’t eat from Chick-fil-A, and I’m thinking like, ‘Oh my God, that’s so crazy. Why?'” Dodson explained in a first video. “They try to explain it to me about the gay marriage thing and how certain people from Chick-fil-A doesn’t approve of it.

And then the internet exploded, because while normally internet celebrities having opinions on things is de rigeur, this one was…really not expected.

Dodson clarified his views in a second video after he was deluged by a flood of “heartfelt” comments.

“As far as people talking about my rights and things, I can go anywhere in the U.S. and buy a house, buy a car. I can do this, do that. I have rights and I’m gay..If I want to get married in the U.S., there are plenty of states I can get married in. I like to travel anyway.”

And regardless of the haters, he still likes Chick-fil-A: “The people at the restaurant are nice, they greet me kindly…I’m not supporting the hatin’ man in charge, I’m supporting them hard workers in the kitchen. They treated me well, so how can I fault them?”