Around The World In 80 Plates Recap: How To Cook Without A Potato 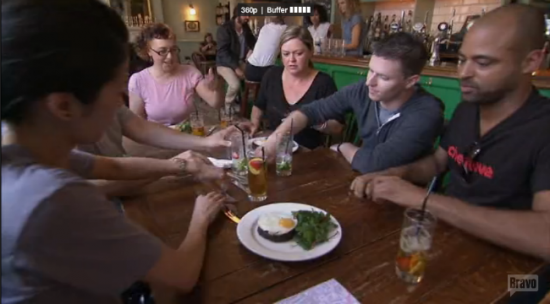 Bravo’s latest culinary television adventure is a smoothie blend of Top Chef‘s favorite gimmick Restaurant Wars and The Amazing Race, with a hint of Survivor thrown in for protein. It’s called Around the World in 80 Plates, but, as we initially suspected, 80 plates hold no significance other than to add snappiness. Bad Titling, Chapter 1. But, this is from the network who gave you Don’t Be Tardy for the Wedding, which isn’t even a remotely clever take on star Kim Zolciak‘s “hit” “single” “Don’t Be Tardy for the Party”. (Wedding doesn’t even rhyme.) We digress.

80 Plates is hosted by Chef Curtis Stone, who has officially snagged enough hosting gigs now to be considered the Mario Lopez of the food world, and lady Iron Chef Cat Cora.

So, of course, the episode begins with the obligatory meet-the-chefs segment, as we see bits of their audition tapes, watch them pack, and see them arrive at destination #1: London’s Heathrow Airport. It’s a decent mix of culinary types: from a flamboyant sorority house private chef, to an Art Smith protege, to the sous-chef of Table Fifty-Two, to the executive chef of the Boston Red Sox, Bravo did a good job of pulling diverse chefs, all pretty equally inept at desserts!

The first challenge kicks off in London’s Borough Market, where the cheftestants meet Cat and Curtis, whose would-be celebrity couple nickname falls disappointingly short of Katniss. The hosts explain the premise of the competition, which takes long enough and has enough official game play terminology to make us turn off the TV and ignore Bravo on Wednesday night. But we don’t. We have a job to do!

The chefs must split into teams on the spot while Curtis explains to them that, at each city they visit, they’ll be given a “course” to run. The course consists of three restaurants, each with its own eating challenge, designed to immerse the teams in the international destination’s culture and cuisine. The first team to complete THE COURSE will win access to THE OUTSTANDING INGREDIENT, which the losing team will be banished from using. (See what we mean about the excessive game play vocabulary?) Finally, the teams must go back to two of the restaurants they just visited for THE TAKEOVER, which basically works like Top Chef‘s Restaurant Wars. Each team must come up with a five-course menu. Three courses must be recreations of the dishes they tasted during THE COURSE. The remaining two courses must be dishes inspired by the flavors, culture, and culinary landscape of the country they’re visiting. Finally, while we have guest critics in to taste the food with Cat and Curtis, the native restaurant patrons will be voting on the chef’s menus and choosing the winning team. The losing team will cast votes a la Survivor to eliminate one of their own at the close of each challenge, so it’s a game of skill and strategy, as Curtis oh-so-heavy-handedly points out. Got it? Good.

The cheftestants’ London Course consisted of, what else, a gastropubcrawl. At Pub #1, each team had to scarf down three plates of Black Pudding Hash and throw back some Pimm’s No. 1 cocktails. Pub #2 served up a bunch of yard-glasses of ale and Steak and Kidney pie. And Pub #3 offered six plates of fish and chips and a pint of Scrumpy cider. Cat ‘n’ Curtis caught up with the chefs at Pub #3, which was a relief, because it meant an end to Curtis’ cheesy voiceover commentary. Oh, and did we mention that amidst all this drinking, the chefs had to navigate the city from pub to pub on their own? Yeah, there were a lot of unpleasant beer sweats by the end.

Red Team wins and gets THE EXCEPTIONAL INGREDIENT, the potato, which pretty thoroughly screws over the Black Team, since potatoes were pretty heavily featured in the dishes they have to recreate. Although, honestly, there was kind of an unnecessary amount of bitching about this, because it’s not like both visual and textural potato alternatives aren’t a thing. Grab a turnip. Do something chefy with it. Roast some cauliflower, whatever.

Chef Sai Pituk of the Black Team makes a good move as an Asian-trained chef and volunteers to run front of the house -— a strategy she plans to continue employing for the Western challenges. She later blows it by exclaiming “Oh, Nigella!”, once critic Nigella Lawson introduces herself as the guest diner. Probably someone you should have recognized by face, sweetheart. Just saying. Despite the fact that the Black Team couldn’t use potatoes, all their dishes looked pretty good, and much more modernly interpreted than the Red Team’s.

The Red Team gets off to a bad start by renaming the pub, which, while a well-known quirk of Restaurant Wars, is apparently bad juju in London. The food verdict? The “kidneys” in their steak and kidney pie were too large and, thus, a prime stereotype of unappetizing British fare. The natives are offended. However, the Black Team’s original dish of a Ploughman’s Sandwich looked downright tasty, while the Brits are scandalized, again, by the shoestring fries on their fish and chips plate. They’d prefer to eat the Queen’s chips, chums.

The Black Team ultimately wins the diners’ votes and is granted safe passage to the next location. Cat and Curtis actually do something useful with their opinions, since their critiques mean nothing on this show, and crown Chad “Most Valued Chef.”

The Red Team must consider who to vote off without any alcohol, so, sadly, the series sadly lacks those hilarious stew room moments Top Chef provides. Unfortunately, all we get is an overblown dramatic moment in which the questionably vegetarian Clara goes home after being thrown under the bus, even though Red Sox exec chef Nookie (yes, his name is Nookie) admits in the confessional that his dish was the worst.