Is The Media Coverage Of Asian American Chefs A Good Thing?

Is The Media Coverage Of Asian American Chefs A Good Thing? 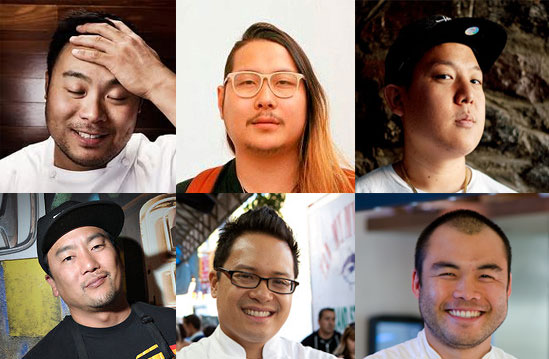 Last month, Josh Ozersky at TIME declared that a particularly talented group of young Asian American chefs were now a genuine force to contend with in the culinary world. Notably, Ozersky emphasized that the motley group — including Paul Qui, David Chang, Danny Bowien, Eddie Huang, to name just a few –“isn’t a fixed grouping, or a hall of fame.” Instead, they are “a phenomenon, a moment where cultural history, demographics and delicious food coalesce.”

From that came a cavalcade of others from media outlets crying out that yes, Asian-American chefs had Arrived On The Food Scene; maybe as Hipster Chefs in food trucks, maybe as people bringing bold flavors and old food traditions to a culinary landscape in metamorphosis.

Most interestingly (from our vantage point, at least), we see Asian-American chefs being heralded for their success by scores of people -– media figures, reviewers, and the food-loving general public — specifically for expressing their culture through food. Let’s acknowledge the obvious first: this is definitely a talented group of chefs with flashy personalities, strong technique, and deep, ethnic roots, whose flavor profiles are new and exciting — just like any group of chefs sparking any other culinary trend. And by parlaying their heritage into success, they perhaps do deserve fame and recognition.

Step outside the culinary world, however, and the prominence these chefs attained here eclipses the strides made by Asian-Americans in other fields. For instance, Asians still remain woefully underrepresented in politics: nine members of Congress are from Asian-American communities, representing nearly 5% of the country’s population. All well and good, until you realize that they comprise 1.6% of Congress. They continue to be underrepresented in the entertainment industry, and an entire pantheon of academic literature exists that dissects the negative stereotypes given to Asians that do exist there. In fact, the only other industry where Asians attain this level of cultural prominence is in the fashion industry, but no one has gushed over their unique Asian-American design aesthetic (if such a thing exists) the way that the media has for their chef counterparts.

It could be that food is a more tangible experience, both intimate and remote. “Cooking is one of the main ways that mainstream US culture has sought to understand Asian-ness,” says Kent Ono of the University of Illinois at Urbana-Champaign, who teaches a course on Asian Americans in food media. “One can consume it in one’s home, without Asians present. One can watch a TV show and not have to engage with Asian Americans.” But in those other arenas, Ono notes, the opportunity to comfortably inhabit one’s Asian heritage is blocked by the submissive stereotype – both for men and women. Far more eloquent writers have covered the limitations of Asianness better than I could, but one thing remains true: as Ono states, “It is a very powerful stereotype and it’s very, very derogatory and has tremendously negative impacts on Asian-American communities.”

But publicity through food? Eddie Huang once lamented to New York Magazine that food was “one of the only places in America where [Asians] are the top dogs,” and this claim stretches back to the 19th century, where the food industry was one of the few areas open to Asian-American workers.

The proliferation of Asian groceries and Americanized Chinese food may have seemed lowly at the time, but in a sense “there were a lot of positives to this,” Ono points out. “Rather than have a boss, let’s say, treating you poorly or demeaning you or degrading you or making racist comments, you were your own boss and you didn’t have to deal with that kind of oversight. In addition, the potential for entrepreneurial success existed. Not that it was guaranteed, but it existed.”

At the same time, there was a price for that success: without the language to explain their cuisine, or the culinary techniques familiar to Americans, Asian chefs were unable to cook authentically.

“They couldn’t articulate a lot of what they were trying to put on a plate as well as we can,” Dale Talde explained in an interview. “I can describe to people a little more in depth about what my food is, more than the classical Szechuan chef that’s been in the States for 20 years, but just calls his food a ‘Szechuan Hot Pot’, even though there’s beautiful bean curd and fiery peppers and Szechuan peppercorns and bamboo and Chinese chives in a really rich, superior broth [of pork, bean shoots and chicken]. He can’t say that shit. He’s just calling it ‘Szechuan Hot Pot,’ and to some degree it’s marketing… I can describe it, and tell my staff and they can sell people on that. Unfortunately, [the old-style chefs] can’t.”

So in a sense, these guys, fluent in both Asian flavors and American patter are lucky: demographic, media, and cultural shifts carved out a space where their passions, their financial independence, their first-generation status and their heritage could flourish, and their identities could be assets in building their careers. (In fact, Ono, who hadn’t heard of most of these new chefs before we reached out for an interview, was not surprised that these “interesting, cool, hip, savvy, characters –- relatively young characters –- are making a way back to the public center through cooking food.”)

But what is the proper way to react to the Asian American Chef cultural phenomenon? The impulse to celebrate their arrival, and their boldness, and their stereotype-shattering attitude, should be a net positive. At the same time, however, such a celebration also serves as a stark reminder of their limitations:  why are Asian-American achievements recognized only in the food world? And why, despite how integral their heritage is to their food, is their new infamy as the Asian American Chef Cartel (or whatever name they’ve been given this week) so dependent on their race?

Perhaps that’s why, as Huang put it in a blog post, the Asian Chef media phenomenon is so strange: “It’s all bullshit and no one will care in 3 years.”