Introducing: Our Feminist Power Rankings Of Josh Ozersky’s Ask Eat Like A Man 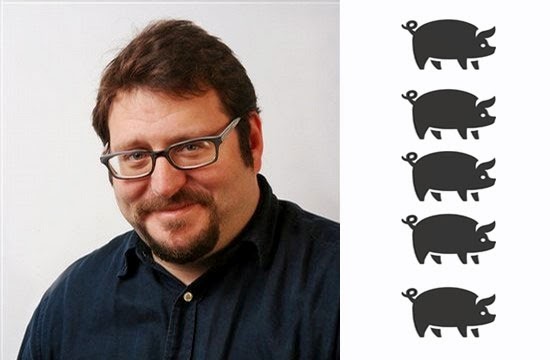 Josh Ozersky spent years writing for Esquire Magazine’s Eat Like a Man food blog without much complaint from us before launching a Q&A column dubbed Ask Eat Like a Man last March. All of a sudden, for reasons we couldn’t quite puzzle out, Josh seemed unable to get through a whole advisement sesh without cracking a joke at the expense of women. We, of all people, understand that a simultaneously engaging and entertertaining Q&A format begs for brevity, and that pith is the soul of snark. But why is the easiest, most concise joke to reach for one at the expense of…well, us?

It’s no secret that we’re hopelessly devoted to Ozersky’s column, 1, because we’re masochists, and 2, because, in the grand scheme of lesser evils, men’s magazines tend to be less offensive to women than women’s magazines. Maybe when Cosmo hires a food editor (or — dare we think it — food critic?) to do more than think up low-cal recipes, we’ll reconsider our position. But until then, we grudgingly keep our GQ subscriptions.

And we’re big fans of Esquire’s Eat Like a Man on the whole. They’re pretty inclusive of all food-loving peoples, as their “About Us” states:

“This is a food blog for everyone, not just men. Even if you’re not a man or you don’t eat like one, we welcome you. It’s just that there are foods that men love and there are ways that men eat that are just different, and we celebrate that. Every day, you’ll find a mix of ideas, interviews, opinions, wisdom, tips, news, and recipes. For everybody. Especially men. And, very often, a drink.”

And it’s not that we think men’s thoughts on food shouldn’t be celebrated. Nor do we think that it’s Josh Ozersky’s singular responsibility as a middle-aged white man to lend his voice to those who lack his privilege. (Ugh, wouldn’t we be the worst for thinking that? We would.) We’ve simply grown weary of feeling crestfallen every time he cracks a tits joke in his Q&A column, amongst his otherwise compelling stories of how hard it is out here for a pig in China and his heartwarming James Gandolfini eulogies. Does John Mariani publish tits jokes? We’ll have to go back through his canon.

In the spirit of checks and balances, to celebrate this column we love to hate, we’d like to introduce Ask Eat Like A Man Feminist Power Rankings, in which we’ll weigh Josh’s James Beard Award-winning, witty and thoughtful insights about food against his inexplicable drive to gender food consumption, often with an anti-lady bent, in spite of his publisher’s mission statement.

The Ask Eat Like a Man Feminist Power Rankings system operates on a scale of One to Five Porks. If Josh makes it through a whole Ask Eat Like a Man column without writing a single quip at the expense of women, making gendered generalizations about food, or otherwise being mean to vegans/vegetarians/juicers/other consumers of perceived “sissy” foods, he gets Five Porks! If he doesn’t make a single insightful contribution to food media to make up for the cheap shot, either, he gets One Pork. (We can’t give him Zero Porks; he’s A Respected Food Journalist and his accomplishments should be recognized, in spite of his occasionally frustrating attempts at humor.)

Without further ado, let’s see how this week’s Ask Eat Like a Man: Who Eats Best On Game Of Thrones? measures up.

Pro: The Game of Thrones food column we’ve been waiting for.

Of all the houses of Westeros, who would you say probably has the best food? I am speaking of the major houses, not cadet branches like the Karstarks.
Josh Ozersky, New York City

I mean, this is obviously the Lannisters. They are the richest, the most depraved, and the most sensual. So let’s set them aside. You have to figure that House Greyjoy has seafood all locked up; nobody who worships the Drowned God and has the kraken as their house sigil is likely to be eating day-old fish. House Stark is too far north, and too steeped in barbarous ascetiscim, to consider gourmandism anything but a frivolous and decadent pursuit. So they are out. House Tyrell has the richest land, but they are boring, so I assume they eat boring food. The only real rival for the Lannisters has to be House Martell, the hereditary rulers of Dorne, whose hot, arid climate produces Westeros’ best wine and a spicy, vivid cuisine typical of tropical regions. So I guess it depends on your taste. Being a meat eater and barbecue enthusiast, I would lean toward House Targaryean (“Blood and Fire”) or House Frey (“Flayed Men Keep No Secrets.”). I hope this answers your question.

Con: He asked that question of himself. (Peep the attribution.)

Pro: Enlightening readers on the history of both Jimmy Dean’s breakfast sausages and Spam.

Jimmy Dean was a popular country singer who lent his name to an obscure sausage manufacturer for marketing purposes.
…
In Maui and Honolulu, the love of Spam derives from a cargo cult that worshiped a can washed up during World War II.

Is there ever a time-place where its ok to cook or eat mock duck?
Andrew Zimmern, Minnesota, Minneapolis

Is that a joke? F Giada, M Nigella, and K Sandra Lee. Obviously. A more challenging one would be a jailhouse version featuring Todd English, Guy Fieri, and Andrew Zimmern. (KFM.) While we are on the subject of KFM, my friend “Viking” Dave Pederson and I once killed an entire Boston-to-New York drive with this depraved game. It got to the point that we were debating an all-evil clown edition of Pennywise, The Violator, and John Wayne Gacy. Once you start in with KFM, it’s hard to stop.

“I actually have been actively campaigning for years to bring back the bib, Alex. Why not? It’s not any dumber than those ridiculous tiny suits with flood pants.”

The use of honey on fried chicken always struck me as a cheap dodge, a prophylactic to prevent people from noticing that they are eating shitty fried chicken. If fried chicken is great, why would you cover it up? It would be like Kat Dennings in a sports bra.

I just got a very expensive juicer as a wedding present. What should I do with it?
Tracy Benson, Shirley, MA

Put it away and never look at it again.

Pro: Refusing to engage with the vegan asshole (who is no less misguided than her meat-headed enemies).

Do you really think that pork that is “small farm” is any better for pigs? They still live in slop, eat garbage, and are brutally killed when they are practically babies. You wouldn’t treat your dog like that. I appreciate that you take animal rights seriously, but you are a hypocrite when you pretend factory farming is the problem. Meat is the problem. It’s been scientifically proven that you can get all the protein you needs from sources that aren’t conscious, and don’t feel pain. “Small farm” is bullshit.
Daria Halperin, Gainsville, FL

Your point is pretty much unanswerable, Daria. But I have to eat to pork, right? I mean, what am I supposed to do? At least the small farm pigs see the sunlight. This is depressing. Can we stop thinking about it now?

Today’s Ask Eat Like a Man overall score comes out to:

Four Porks! We might have considered five, judging the relative severity of the other cons, which were far outweighed by the pros, had it not been for that damned Kat Dennings joke.

Good work, Josh. Until next time.