At The Capital Food Fight, Celebrity Chefs Picked On Each Other While Jose Andres Watched Helplessly 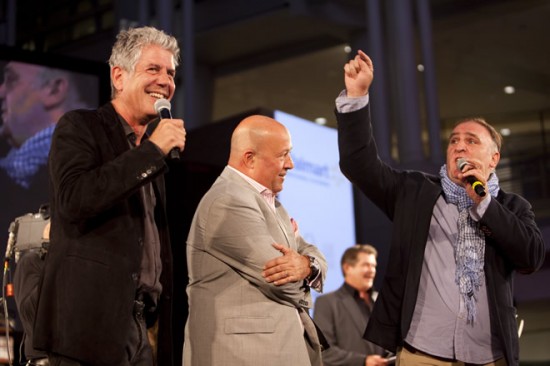 Lest you think that last night was all about sensual feeding and sexy models as ham platters, Eater DC’s Amy McKeever wants to set the record straight: the Capital Food Fight, the annual culinary showdown/fundraiser held by DC Central Kitchen to fight hunger, was also all about your favorite celebrity chefs (and Padma Lakshmi) joking around and insulting each other.

Jose Andres and Anthony Bourdain co-hosted the event, while Padma joined Andrew Zimmern and Carla Hall at the judges’ table. Battling against each other, with Iberico ham as the secret ingredient (as is Jose Andres’s wont) were Vidalia’s Jeffrey Buben, Elisir’s Enzo Fargione, Cuba Libre’s Guillermo Pernot, and Bourbon Steak’s Adam Sobel.

The winner of the event was Jeffrey Buben, who was also celebrating his birthday as well as his surprise announcement that he was moving to Los Angeles. So many life changing moments for him!

The winner of the evening: everyone who got to hear Bourdain and Zimmern sniping at each other like scorned lovers, while Andres tried desperately to keep the evening PG:

Zimmern complained to Bourdain for leaving him alone over at the Travel Channel, resulting in the following exchange:

Zimmern: Why did you leave? You left me all alone there. You know how horrible it was. And you just left me there. And you’re my friend.

Bourdain: And you’re the only guy left on that network that can get to eat nut sack.

Jose Andres explains it all: This man over here left the Travel Channel and he has joined CNN. That means he’s going to be drinking with Anderson Cooper around the world. And now Andrew Zimmern, he’s alone on the Travel Channel. Do you get it? This is catastrophe. I don’t know what Romney will say about this. Or what President Obama is going to do about it.

Zimmern: It’s not that bad. I am sitting there left in the room while everybody’s outside having another drink and smoking a cigarette. It’s a lonely feeling.

Bourdain: You’ll have to join me in the Situation Room. We’ll put a few pounds on Wolf Blitzer.