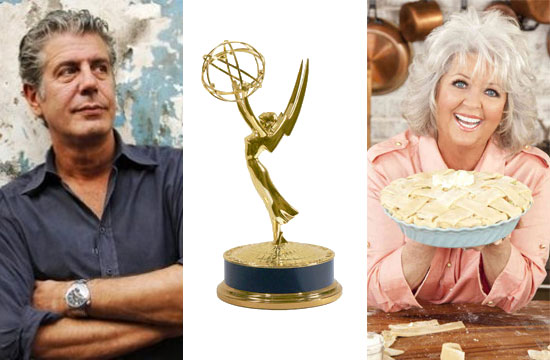 Buried in the bottom of Virginia B. Wood’s weekly food column in the Austin Chronicle came a surprise jab at Anthony Bourdain, king of the Bad Boys. To be more precise, it was about the “double standard” that Americans use in deciding which celebrity chef to worship:

The Emmy nominations were announced and a prime example of that American double standard I was talking about slapped me in the face: An unrepentant former heroin addict who gets drunk and stoned on television is regarded as a “charming bad boy” and gets multiple award nominations, but Paula Deen is a pariah? Seriously?

No malice intended in the next few statements, Ms. Wood, but it’s kind of impossible for the Emmys to have snubbed Deen — if you’re referring to the Emmy nominations announced last week, which were for shows aired on primetime. Deen’s media fiefdom might be vast, but it’s never included primetime programming. (Deen wasn’t nominated for the Daytime Emmy Awards this year, either, but those were announced in May and awarded in early June — way before the world learned of Deen’s racist proclivities.)

We suppose you’re making a grander point about the fickle nature of celebrity worship in America, and are perhaps wondering why America has apparently sided with a rakish, recovering heroin addict over the sweet Southern grandma, or puzzled by why black people don’t want to dress up as Aunt Jemima. It just boils down to our observation that Americans forgive bad behavior if the transgressor expresses real, honest remorse. See: all the times that Bourdain admits how drugs were the worst thing that ever happened to him, vs. Deen’s “#sorrynotsorry” video responses. (Also, why Anthony Weiner’s not gaining any traction after his second sext scandal.)

But really, your biggest enemy here is the timeline.

[The Austin Chronicle via Eater]