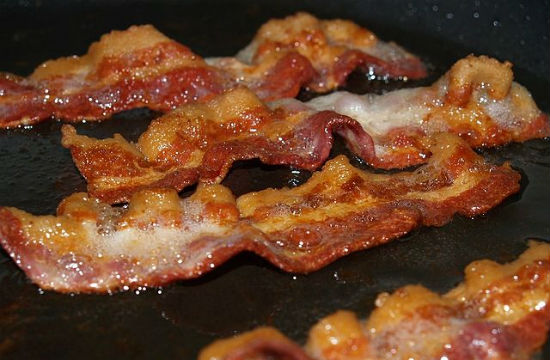 Ugh. So it’s “Bacon Connoisseur Week.” And the only thing worse than poor bacon’s harshly over-exposed celebrity is a direct abuse of its flavor power.

See: this guy, Chef John Johnson, who’s creating a 500 pound “hog log” for Baconfest St. Louis, which basically consists of 300 pounds of Italian sausage, wrapped in 100 pounds of bacon, stuffed with 100 pounds of bacon. Mind-meltingly enough, there’s actually a turf war unfolding in the comments of this report, with some other chef arguing that he invented the hog log first, so we’re guessing that if Johnson receives any sort of big time recognition, there will be a massive logsuit. As STL Today appropriately inquires:

The question remains: Does the 10th most obese state in America really need a hog log?

“Absolutely,” insists Guillot. “We’re doing this because people deserve even more bacon. Just think, this would be a very different event if we named our kickball team Salad.”

…Come back to us after you’ve released a long, heavy sigh.

Because meanwhile, across the pond, more bacon wars erupt. A food writer for The Guardian wrote a piece maligning the Full English Breakfast, revealing all his inner feelings of shame at being associated with such a fried fatfest as A People. Predictably, the comments erupted, and we learned that most Brits find The Guardian impossibly snobby. Huh. We definitely don’t have a US equivalent of that debate. Jay Rayner even chimed in to express his frustration with His People (Brits, not fellow Guardian writers).