Beer Pong Will Give You Diseases, Play These Chef-Inspired Drinking Games Instead 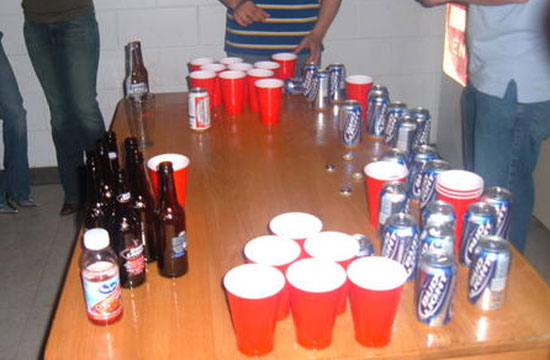 For the substantial bro population of The Braiser’s readership, we’re about to disappoint you heavily. We’re really sorry in advance. But a recent study from Clemson University discovered that ping pong balls (when used in beer pong) aren’t just dirty — they’re practically lightweight spheres of fecal matter, coated with salmonella, listeria, E. coli and staph, that fly straight into your red cup full o’ Natty Light. Which you imbibe. Repeatedly.

Would you like to drink listeria? No? Maybe it might be a good idea to take the beer pong ball out of your social drinking and play the following games instead. And since we’re a classy site that happens to focus on celebrity chefs, we’ve hand-selected the best drinking games out there, to play during all your favorite classy chef shows.

WARNING: By playing the following games, you will be trading staph infections for cirrhosis of the liver. But you’re not worried about your liver yet, right?

With things like “rules”, a “game that never changes”, and “Ted Allen“, Chopped will get you reliably schwasted due to its never-changing format. In fact, DrinkiWiki’s version of the Chopped drinking game is unswervingly straightforward:

Aarón Sánchez: ONE SHOT for each word pronounced with an exaggerated Spanish emphasis. (ex. Jalapeño, tortilla…) + one drink for each repeated pronunciation.

Amanda Freitag: 2 drinks every time she is displeased with seasoning.

Geoffrey Zakarian: 3 drinks every time he finds an irrelevant and minute flaw with a dish because no other judges had complaints

The Iron Chef Drinking Game (Japanese version)
While there are certainly rules in Iron Chef, the fun comes from the insanity of the show itself. Seriously, the show is practically a version of King Louis XIV’s court, where everything revolves around The Chairman (except in a totally Japanese way). We dug through some old Internets to find this quirky Iron Chef drinking game from the earlier, weirder days of the Food Network, which has this one insane rule:

At the beginning of play, choose a “Chairman.” It doesn’t matter how you do it, but the Chairman’s role is a very important one. He decides when the subjective drinks are warranted, and also has the power to “make up” a drink: should the Chairman feel that something deserves a drink (like if something incredibly stupid happens), he can direct everyone to drink for it.

While particularly apt for Fraternity game nights, this is not a good game to play with that one friend of yours who wants to be a dictator.

We know that the only way to get through an episode of Hell’s Kitchen is through drinking a liter of alcohol. But since Hell’s Kitchen is a visual representation of chaos theory, we figure that it’s only appropriate to drink whenever the spirit (or the vocal chords) of Gordon Ramsay compel you. Here’s a few pre-written games, in case you want to cling to some semblance of reality, with rules like:

So famous that even Lee Ann Wong once subjected herself to its insanity, the unofficial Top Chef drinking game depends on the various personality tics of the judges, the inevitable talking heads of the contestants, and the nearly obscene amounts of product placement. For instance:

For the Cheftestants, take one drink . . .

. . .whenever a cheftestant says something along the lines of “I don’t care if others don’t like me because I’m here to compete, not make friends”.

. . . whenever a cheftestant says they should have no problem with a particular challenge because it’s in their area of expertise. Two drinks if they fail the challenge.

Seriously, the rules are so extensive, by the end of the Quickfire you’ll be as drunk as Padma Lakshmi at Judges’ Table.

The “The Taste” Drinking Game

Rating: Easy. Drink until the parietal lobe, responsible for long-term memory in the brain, is sufficiently damaged enough and you no longer remember this travesty of a show. Everybody wins!