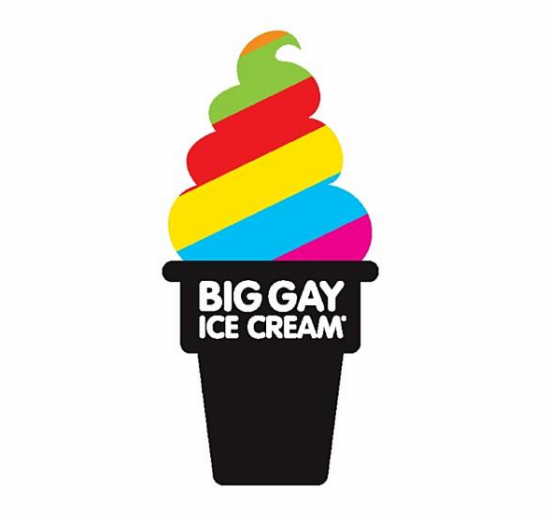 After last month’s Big Gay Ice Cream reading at Carrino Provisions, we descended upon Dale Talde‘s breathy reggae-booming basement speakeasy Miss Wong’s to sip Diet Cokes and discuss Bryan Petroff and Douglas Quint‘s just-published ice cream cookbook-yearbook, packed with recipes for PepperCoke Sorbet, outtakes of comedian Dave Hill and a de rigueur blind man artificially inseminating a cow with a turkey baster, all kicking off with a foreword by Anthony Bourdain, whose wife, Ottavia, the authors won over, as one does, by together snickering at a frantic Bethany Frankel crawling around the floor of Barneys New York.

Did lacking kitchen experience before opening the truck, motivate you to strip down the recipes, to make them more relatable to the reader?

We just wanted a cookbook people would make stuff from. While I admire books friends of mine have written, I don’t see them as books people would use. And people don’t cook out of cookbooks anymore, they cook off the web. So we stripped down our recipes to make them accessible. I want people to say “Oh my God I made this myself and I love it!” That was in the back of our mind the whole time.

And the book proceeds from easier to more challenging?

When we were brainstorming recipes we were all over the place. Do we do seasons, colors, years, difficulty? Part of it was we were tired of being known as the people who do the wacky toppings. If that’s all we’re known for — we want to be more than just that. Like Prince, he’s more than Let’s Go Crazy. So we wanted the book to flow from our professional experience.

Our first year we just used store bought toppings. When we developed recipes for the book deal we walked away from, those are the toppings and recipes you see in that middle section. The sundaes, shakes, and composed items stem from the truck days, and the ice cream is what we learned once we started opening our shops.. It was hard when we were making these recipes — can people find ginger syrup? But we felt these were things people knew about us, And at the time we were just two stores in New York, and it was our way of getting a taste of Big Gay Ice Cream to people who’d never come to our shops. We’d never open in their city.

But you are expanding to Los Angeles.

We say we’ll only grow as big as we can without our heads exploding, and we both move slowly when we come to decision making. We actually spent two years researching LA, being courted by LA, before we said we could do it. We knew we wanted to expand in year-round ice cream cities. As much as we love New York and Philly, we needed to get out of the northeast in some regard. Boston and San Francisco are huge ice cream cities, but we wanted to be able to see sun in February.

And we tweaked recipes. This is why we’re still not open; we’re using different cows, different dairy, so its not as simple as saying “this is the recipe that Ronnybrook is producing.” It’s saying  “let’s start with the Ronnybrook recipe and then tweak it to taste like our east coast ice cream.” I think it’s very hard to make simple stuff great, it’s a cliche but true, whether a perfectly grilled steak or ice cream base. I’d rather make delicious ice cream than weird ice cream.

But if we do another book down the road, I want to make a book that will make this one look tame next time. This is what you want? Then we’ll give you more than what you want.

You mention in the book you never wanted to be TCBY or Sixteen Handles, but were you surprised they never ripped off your ideas the same way Dunkin Donut co-opted Dominique Ansel’s Cronut?

I did feel like they were paying attention over the years. Speculoos suddenly became a lot more popular after we were doing it. Maybe I was more consciously aware of it, or it was a natural trend in food, like dark denim in fashion. Red Mango was never getting away form gummy bears. I wouldn’t have to worry about that. But if they did, what can I do? Honestly I don’t pay attention to anything else, it’s hard enough to run my own business let alone pay attention to everyone else. Sometimes things overlap, that’s why you get two volcano movies in the same summer.

And you tell stories about the difficulty in launching a truck in New York, would you discourage people who might now want to follow in your footsteps?

I’m never going to tell someone not to do something… but always have a backup plan.

We never bought a truck, we never had to spend $15k on a black market permit. All we had to do was sit through the horrible Department of Health licensing process. Not to say it was easy, but financially it wasn’t sink or swim for us, to start a business and just check out a truck. It made us more comfortable in stretching our brand and the experience we offered, to put that name and logo out there, and made us comfortable enough with what people thought were crazy toppings. If we started with more money it would have been a safer experience, but maybe we wouldn’t have done it.

Is there one thing everyone has in their pantry they don’t realize would make an amazing topping?

Their jams jellies and preserves. Knowing you can doctor up the jars in your fridge, take your strawberry jam, put it in a little pot, crack some Szechuan pepper into it, pour that over some Haagen-Dazs and in three toppings in your fridge you’ve made strawberry Szecuchan ice cream, that’s the kind of creativity and encouragement you’d hope the book inspires.