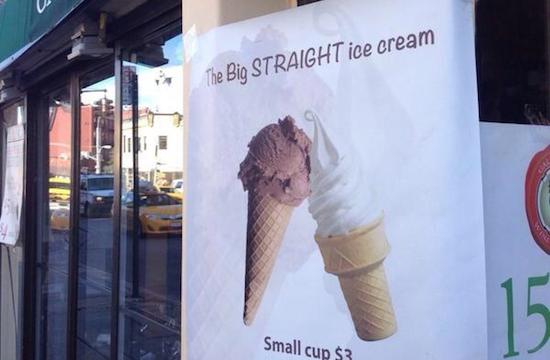 Because being homophobic, tone-deaf, and completely the opposite of being self-aware is the only way to sell ice cream … so at least so one restaurant seems to think.

Gallo Nero, just up the street from one of the locations of Big Gay Ice Cream, posted a sign advertising “Big STRAIGHT Ice Cream,” which just vanilla and chocolate soft-serve. (Why would straight ice cream be anything but run-of-the-mill?) Big Gay Ice Cream took notice and called out to its followers on Twitter to maybe say something to the a**holes there (our words, not theirs).

If you pass by @galloneronyc maybe you could pop in & let em know what you think of this advertising campaign. pic.twitter.com/1QjSICy9lR

.@GalloNeroNYC is at 95 Seventh Ave South. I'm sure they would welcome your in-person feedback. pic.twitter.com/zeEAIW8Vau

Cool as a cucumber, these guys.

Twitter naturally exploded, of course. Even Perez Hilton got on it. (Gallo Nero hasn’t been active on Twitter since 2012, though, so maybe an in-person approach is the best way to air your “WTF GUYS.”)

@GalloNeroNYC I heard your ice cream gives people diarrhea. Is that true??? I think I'll stick with @biggayicecream!

Perhaps best of all was the restaurant’s reaction to Gothamist, when asked what was up with the sign. Said the unnamed manager to Gothamist, “What’s the issue? We can call our ice cream whatever we want, … “They have their own way, we have our own way,” invoking stupid Burger King references and MORE HOMOPHOBIA AND STUPIDITY.