Bobby Flay Blasts Young Chefs: They Think ‘A Tattoo And A Bottle Of Sriracha Equals Success.’ 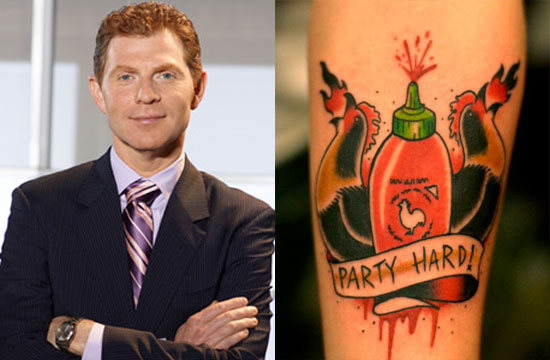 What happens when you get Marcus Samuelsson, Bobby Flay, Scott Conant, Geoffrey Zakarian, and restaurant manager Scott Feldman to hang out in Vegas for a weekend? First, it ends up being a luridly attractive mix of The Hangover and Entourage, plus a few more episodes of “chefs storming the kitchen just because.”

Second, when Departures Magazine loosened up the Chef Wolf Pack with cigars, whiskey, a few rounds of golf, and world-class food, and then asked them to talk about fame, you get this exchange slamming young, personality-driven chefs attempting to use the industry to “make money, get bitches” (our words, not theirs):

Flay: “That’s because they became popular based on popularity. There’s a difference. Everybody at this table put their chef coat on and peeled potatoes. We understand what it takes to make it work with and without fame.”

Conant: “… These young guys on Top Chef, any of these shows, have had this little taste of what they think is success….”

Flay: “I’ve seen it posted outside a restaurant: ‘Third Place, Top Chef San Antonio.’ They spend the rest of their career trying to find that place they lived in instead of trying to stay relevant in a different way.”

Samuelsson: “Love for the craft, man. We are still talking about the same chefs in Europe even after 30 years. It should be that way, but now people want to go straight to the penthouse. You gotta use your craft, get savvy. Make some bad business deals, take some punches.”

Flay: “You can’t substitute experience and time—you can’t speed it up. You can become successful as a personality, but your repertoire will run out very quickly.”

Samuelsson: “And that comment about celebrity chefs never in the kitchen, it doesn’t make sense. I am in the kitchen every day, but you don’t define an artist by how much he paints. You judge him by his skill level and what he’s punching out.”

Flay: “You have to have your face in the food. These days people think a tattoo and a bottle of Sriracha equals success.”

And yet, the young’uns don’t listen to their elders nowadays or, as Socrates once maybe put it: “Our youth now love luxury. They have bad manners, contempt for authority. They show disrespect for their elders and love chatter in place of exercise; they no longer rise when elders enter the room. They contradict their parents, gobble up their food and tyrannize their teachers.”