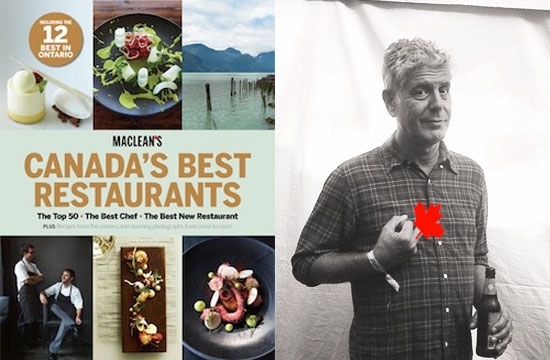 Creating a Top X [Insert Food Thing Here] In [Insert City Here] listicle is always a hazardous task, even if you’re an esteemed Canadian weekly newsmagazine. But the vitriol surrounding MacLean’s very first list of the Top 50 Restaurants is uglier than most, particularly with the alleged reasons behind some of the magazine’s selections and snubs.

Many prominent voices in Canada were furious at the omission of two restaurants in particular: Joe Beef and Au Pied de Cochon. No one was as enraged — or, at the least, as scathing — at the omissions as Anthony Bourdain, who wrote an email to Montreal Gazette dining critic Lesley Chesterman, which was read aloud on her radio show:

Omitting Joe Beef AND Au Pied de Cochon from any list of top 50 Canadian restaurants (or even a top ten list) is like writing a history of British rock and roll and willfully neglecting to mention either Beatles or Stones.

It speaks of a personal agenda so deranged or corrupted as the [sic] throw the entire enterprise into disrepute. Both restaurants are in fact, Canada’s best and most Influential cultural ambassadors. I can’t imagine what kind of spongiform bacteria might have caused Mr. Richler to neglect one or the other.

Oof. The reasons for the vitriolic response, however, stems from a tweet from Joe Beef’s co-owner David MacMillan, who’s had a bit of history with the author of the piece, food writer Jacob Richler. “If we aren’t in @MacleansMag is cause we have known and don’t respect Richler for a decade,” he tweeted. “Personal stuff , thank you for your support!”

As for the omission of the famed Au Pied De Cochon, Huffington Post Canada reports that the Canadian food scene is collectively outraged over that one, with even restaurants who made the list upset that P.D.C. wasn’t honored. Maclean’s “addressed” the controversy by acknowledging its existence on its blog, though it hasn’t issued an official response to Bourdain’s allegations.