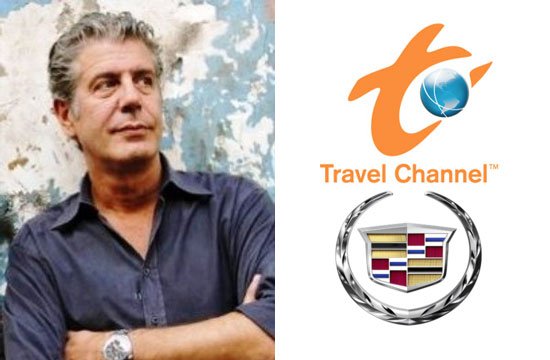 After first sounding off on Twitter to express his rage upon seeing the Travel Channel use his image (without his permission) to endorse Cadillac, Anthony Bourdain took to Tumblr to parse out a thoughtful, calm response to the incident. However, “thoughtful” and “calm” does not necessarily mean that Bourdain was any less apoplectic — or any less likely to file legal actions against his former cable home.

See, apparently written into his contract with the Travel Channel — very explicitly — is the caveat that Bourdain’s image or name would never be used “to either endorse, or imply use of a product without [his] specific agreement.” This is for a very specific reason.

“My inclination, I should point out has always been to do NO product integration of ANY kind,” he wrote, revealing that he’d been stung by the backlash to his infamous Chase Sapphire integration into No Reservations and, as a result, rarely does product endorsements anymore. “I think I am known as a person who expresses his opinion freely about things—and I was sensitive to the possibility that if I was seen taking money  for saying nice things about a product, my comments and choices and opinions would become, understandably, suspect.”

But when the Travel Channel used footage of him from No Reservations next to a Cadillac, the implications were clear, especially to Bourdain: “…at least, I was very likely IN that Cadillac—and that if nothing else, I sure as shit was endorsing Cadillac as the vehicle of choice for my show.”

The worst part is, they ran it again after he made his “extreme displeasure known.” Add to that the indignity of a final season full of Frankenstein’d clip shows to fill the episode count, and Bourdain simply lost it with his former employers. “I CAN do something when my name and image (such as they are) are used to sell a product without my consent and in violation of prior specific and well crafted legal agreements,” he wrote, furious. “And I intend to.”

It’s an inglorious way to go out—after 8 seasons of television programs of which I—and all the people who worked on them—are very proud. I miss the happy times at Travel, the first Big Cheese there, a Mr. Pat Younge, in particular, who really took a lot of chances on us. Who believed in us, understood us, appreciated the work we did and how much it meant to us. Who understood that keeping faith with our fans in the long run  meant something more than short term profit….

While this would seem to be a problem most people wouldn’t mind having; I can only ask how you’d feel if somebody was out there using your name for purposes of their own—without your knowledge. If they presented you as someone you are not, as holding opinions you don’t hold, and making money off those misrepresentations—however embarrassing to you.

Bourdain also stressed that this is in no way a disparagement of Cadillac or any of its all-American workforce: “I apologize to the guys on the production line at Cadillac, for finding the thing YOU make, and I have no doubt, are very proud of, in the middle of a rancorous disagreement.” How very Bourdain.