Bourdain Comes Back to the Iran Haters: ‘Guess We Shouldn’t Show People … Anywhere We Find the Policies Repugnant?’ 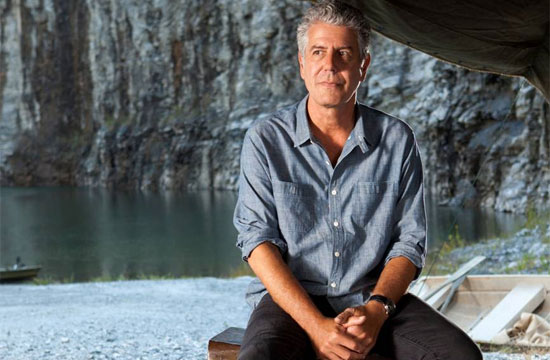 Despite the praise lavished upon Anthony Bourdain and Parts Unknown for its Iran episode, the host took to Facebook to defend himself against the backlash of featuring a country where “we find the policies repugnant.” Ooooh boy.

He explained his complicated position more on Medium:

During my time in Iran, I was not naïve about where I was — or the realities of the situation. The secret police camped out a few doors down from my room (very congenial ones, to be fair), were a reminder. The fact that twitter, instagram, and Facebook are forbidden. The sinister sounding “Ministry of Guidance”, for whom we had to refer for approvals, were unfailingly congenial and helpful, however. No intrusive government presence — or attempts to shape our story were felt as we went about our business, unlike any number of other places we’ve shot over the years. …

This is not a black and white world — as much as people would like to portray at as such. That’s not an apology for anything. I’m just saying that the brief, narrow slice of Iran we give you on this episode of Parts Unknown is only one part of a much deeper, multi-hued very old and very complicated story. Like anything as ancient and as beautiful as the Persian Empire, its worth, I think, looking further. It’s also place that can warm your heart one day and break it the next.

It was clearly an emotionally charged episode from the beginning; after all, two of his hosts were imprisoned shortly after filming. (Bourdain revealed on Medium that Yeganeh Salehi has been released, but journalist Jason Rezaian is still detained.) Bourdain dedicated the closing credits to the couple:

Wow,classy .. @Bourdain closes Parts Unknown in #Iran with a photo of jailed WaPo journo Jason Rezaian and his wife: pic.twitter.com/Q8UAjm0SED

And the crowd went wild (so to speak) with praise on Twitter.

https://t.co/hlR2P5qAI9 — this is the Iran I know and wish the rest of the world would see. Thank you @Bourdain 4 your beautiful piece

The @PartsUnknownCNN Iran episode with @Bourdain should be required viewing for all Americans. #PartsUnknown

Jesus, @bourdain you have singlehandedly changed my opinion of an entire country. #PartsUnknown

Nevertheless, Bourdain had to say something to the haters.

Still, the praise has seemed to far outweigh any criticism thrown his way — or to Iran.

RELATED: Here’s the Sneak Peek of the Much Talked-About Iran Episode of Parts Unknown
“In Most Un-Shocking News Ever, Parts Unknown Wins Another Emmy
Anthony Bourdain Continues to Speak Out for the Nice Guys in Iran