Bourdain Finally Talks about Paula Deen: ‘I Don’t Have the Heart to Pile on at this Point’ 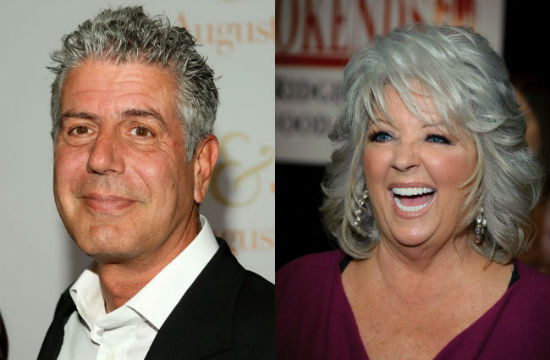 To the People Who Care: Anthony Bourdain finally revealed his thoughts about the Paula Deen racism scandal, and to our surprise, he was…actually very political about it.

“It would require a long complicated answer and I don’t have the heart to pile on at this point,” he told Yahoo!’s The Wrap. “I take no pleasure in it, let’s put it that way.”

(That was probably the smartest way to respond, given how thoroughly everyone else has done it in the Summer of Racism 2013 , but there’s still a tiny part of us that hoped for some Avenging Bourdain Action for that warthog rectum incident.)

However, he did express disappointment at the allegations in the racism lawsuit agains the Deen family’s Savannah, GA restaurant:

“This was a workplace problem. I think, clearly… let’s put it this way. I am no angel. I am no angel. But at no point in my life ever would some of the behaviors described in those depositions be accepted in any kitchen I ever ran.”

But enough about that, let’s get back to the real reason Bourdain’s storming through the media again: the premiere of Parts Unknown, which you can read about in the rest of the interview below. (We know you didn’t click on this post to hear him wax eloquent about the peace process in the Middle East.)