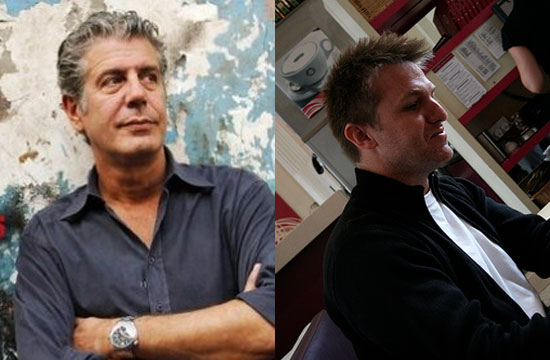 Okay, the headline should technically read “Anthony Bourdain Signs Graham Holliday To Write Book About Vietnamese Street Food,” but you know what? I can’t. I’m not even sure how to parse the weird mix of frustration, resignation, and bemusement I have about the idea of yet another version of White Dude Coming To Vietnam and Falling In Love With Its Amazing People And Food: Post-Colonial Narratives Are Amazon.com Gold, by Whitey White McWhiterson.

First, the facts: Bourdain, who edits a special imprint for Ecco Books (and recently published a book about Texas barbecue), signed renowned freelance journalist Holliday to write a book based on his blog, Noodle Pie. The blog itself focuses on Vietnam’s street dining scene — a scene that Holliday knows more about than I would, seeing as he’s lived there for years and I’ve only been dragged there for weeks — and has won multiple awards for Holliday’s in-depth work.

Bourdain himself commissioned the book, according to a post on Noodle Pie this morning. “It is he who believed in me enough to push me to write this book in the first place,” Holliday wrote. “And it is he, who so far, has let me proceed in the writing process with zero interference. I assume that may change as soon as he wakes up to my horrendous grammar.”

It’s a good blog. I was a fan of the blog long before I started working at The Braiser, I still like it a ton, and I have no doubt that Holliday will turn out a well-written book. And Holliday certainly knows his Vietnamese food, better than most acolytes of the subject. So maybe I’m not furious that a highly talented writer’s going to write a well-publicized book exploring Vietnamese cuisine in its own motherland. Maybe it’s a good thing, and perhaps I should be happy that these guys are promoting Vietnamese food — a cuisine that I’m intensely proud of — in the United States.

Here’s the weird thing about being an immigrant minority who sees white people writing about Your Food, though — it’s like having a skateboard. (Yes, this is an extended metaphor, deal with it.) You save up money for a skateboard and then finally, after months and months of scrimping around for extra change, you finally get to purchase one. But you don’t know how to skateboard. So you’re stumbling around, trying to figure out what to do, and you keep falling off and scabbing your knees, and suddenly your distant cousin enters the area. That cousin of yours is not a bad person, and you don’t know him that well, but his family’s wealthier than yours, he’s probably going to an Ivy League college, and he’s wearing really nice boat shoes which match really well with his perfect teeth.

He sees you with your skateboard and asks if he can try it out. “Sure, whatever,” you say, but secretly you’re thinking that he’s not going to be so good at it. (Seriously, look at his stupid perfect teeth.)

Then he does a 900-degree aerial and is suddenly swooped off to participate in the X-Games.

And as he goes on to becoming Tony Kensington Hawk III, you’re left standing there, stunned and stuttering: “But…but…but…that was my skateboard.”

So I guess the skateboard in this metaphor is Vietnamese food, which is, uh, wheeling a white guy to fame and fortune. And now you don’t have a skateboard anymore. And if you do get it back, everyone will inevitably go “Hey, wasn’t that Tony Kensington Hawk III’s skateboard?” and you’ll go “NO DUDES IT WAS MINE BEFORE HE TOOK IT.”

That is the best way I’ve ever been able to describe this Asian-American impotence, and it still feels silly. Argh, why is American racial identity so difficult to explain to people? In any case, congratulations to Graham Holliday on his book deal. May he make a lot of money off my skateboard’s noodly wheels.