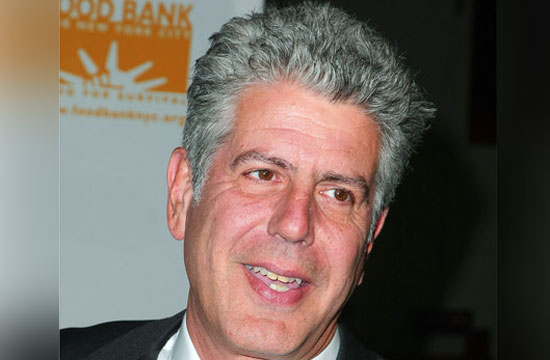 Another day, another conservative-leaning news organization taking pot-shots at Anthony Bourdain’s potty mouth. Today the role of Indignant Family Values Pundit will be played by Newsbusters’ Noel Sheppard, who took issue with Bourdain over this Parts Unknown clip, which — and this is apparently important — aired on CNN.

Sheppard’s issue, of course, centered on Bourdain declaring his sports nickname to be “The Enormous Cock,” after his Colombian opponent chose “The Old Chicken.”

To recap: Anthony Bourdain made a penis reference on CNN (or was it just a fowl reference?) which is terrible for the moral fabric of society, according to right-leaning sources like Newsbusters and Fox News (which Bourdain called out last week over Twitter). Is it, though, or is it just another reason for conservatives to sling accusations at CNN? To assuage any conservative readers out there — and I was once one of you, so I know how you feel — this isn’t going to be the “conservative media is dumb” rant you expect. Stick with us.

Like we (and our pals over at Mediaite) point out on numerous occasions, there are plenty of reasons to make fun of CNN. Some in our organization may think that CNN often performs a disservice the institution of journalism (and hologram technology). CNN relies on a lot of silly television experiments (read: Anderson Live, Rick Sanchez, anything involving technology). CNN might fatally cock up the coverage of the biggest manhunt in recent US history (we’re looking at you, John King). CNN might keep Wolf Blitzer on the air. But since when is “Bourdain boosts CNN ratings, therefore, CNN is desperate and THE WORST” ever a real argument?

It’s no secret that Bourdain, whose previous shows No Reservations and The Layover were ratings juggernauts for the smaller Travel Channel, was brought in to boost CNN’s ratings (which, need we remind you, were horrendous). However, the success of No Reservations never really hung on Bourdain’s mouth full of bleeps — at its best, it portrayed the world in ways that television never really had before. And besides, when you’re accidentally stranded in Lebanon in the middle of a war, or burning $500 million worth of cocaine, or eating food that reorganizes your mind, there’s really nothing to do but swear.

So why are Newsbusters, Fox, and the inevitable tsunami of moral crusaders that follow them concerned about Bourdain’s swearing? And why are they concerned now?  Did they just discover Anthony Bourdain’s degenerate, drug-addled past; or was Kitchen Confidential on Glenn Beck’s book club in the past month? Could it have taken that long for his presence to infiltrate News Corps?

Okay, fine, we’ll skip the rhetorical questions (we’re no Pete Wells). The moral outrage probably started because Bourdain brought his act to CNN, and his act is doing quite well. We’re dubious, however, at why the moralists are only organizing now. It can’t be because Bourdain’s exposing their children to profanity, since we highly doubt, as one expert told the Fox News columnist, that any parent would allow kids to watch CNN’s relentless coverage of human rights abuses, warfare, sex trafficking, and famine. Especially on a school night. (Unless CNN’s captive audience has been children all along; in which case, we will happily issue a retraction.) And it’s not just because Bourdain’s foul-mouthed and amoral ways are broadcast on a prestigious network; by that logic, Fox Entertainment’s lineup (including wholesome shows like Family Guy and Glee) would never be allowed to coexist with Fox News on the same channel.

It must be, then, an impulse-based reason to engage in the age-old game of “Beat Up CNN” and get people freaked out about the declining standards of The Liberal Media — albeit for completely unfounded reasons. We, too, have Beat Up CNN, but we prefer to dole out our beatings based on fact and analysis, not paranoid conjecture and snark. (Okay, maybe just a little snark.) Bourdain’s show just so happens to be wildly successful because of its mix of highbrow culture, lowbrow food, and a global focus.

Although, if we may engage in conjecture for just a moment: maybe the swearing is somehow inoffensive to the 25-to-54 demographic that Bourdain wins among cable viewers in that time slot. Hey, at least Fox still wins the Demographic Of A Certain Age award.