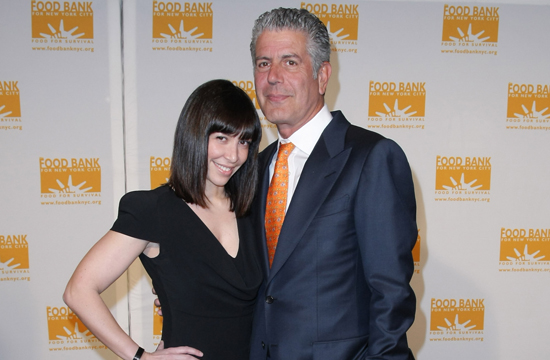 To our confused reader, wondering where they are at the moment: welcome to a strange parallel universe where up is down, black is white, soda is a rare delicacy found in female sea urchins, and Ottavia Bourdain is a vegan. Please, sit on this cactus (for that is what we use as “chairs” in this universe), and we will tell you how this came to be.

Back in the real world, Ottavia and her husband Anthony are renowned for the fact that they eat all of God’s creatures (as long as they’re raised humanely and ethically), but apparently in VICE.com’s Fightland, Ottavia decided that — for fun, and for a good article — she would try going vegan for a week at the suggestion of a few MMA friends.

The universe she was originally from did not approve of this suggestion and fought it tremendously: throwing bad vegan restaurants at her and her husband, inducing a terrible case of acne, plopping her at a party full of fried chicken/lamb chops/burgers in the form of finger food, and a near marital split:

During the meal my husband looks up at me over his sludgy brown rice and says, “We’ve never been so close to divorce.” I hope he’s kidding, but looking at him, I’m not so sure. After we get home he elaborates… “That was one of the worst meals in history. It tasted of hippie. It tasted of my last weed dealer’s apartment. I hate the world now. Please kill me.”

Had Ottavia continued this madness, Anthony might have left her and devoured a cow with his bare hands to cope with his grief. Instead, after a week, she felt good enough to continue the experiment for another week — and might even continue beyond that.

The only explanation is that we’re in an alternate universe.

Or that she won a gold medal in her division at the International Brazilian Jiu Jitsu New York Open last weekend and wants to keep on harnessing whatever good ju-ju came her way.

Alternate universe it is, then.