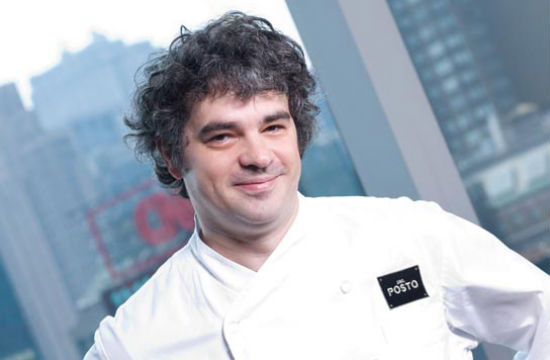 It turns out that the best profiles of pastry chefs are written by other pastry chefs. See: this interview with Brooks Headley, fresh off his James Beard Award win for Outstanding Pastry Chef, written by former Calliope pastry chef Shuna Lydon. For instance, did you know Brooks turned to pastry because he was a ’90s punkrock vegetarian, and dessert was the only medium that wouldn’t force him to cook meat? Sidebar: Chocolate is totally more punk than beef, and we finally have experts agreeing.

“He is a genius of Italian food and has taught me much about hospitality, humility, and grace…All while we were (and are) getting our asses kicked by insane numbers. Del Posto is a big, crazy resto! And that guy works service almost every day, studies shit and reads constantly, is a fucking total comedian, and a force of inspiration for me daily. Should I stop gushing here? Yeah, I do not really know of another pastry chef who has found a savory-chef soul mate like that. I kinda won the fucking lottery.”

Our new favorite bromance? It’s possible. Just don’t mistake him for one of those fussy pastry types. He may be a dessert man now, but he’s still punkrock to the core. Says Brooks:

“I swear if I see another fucking overgelatinized mousse cut into a perfect bar with a curlicue perfectly tempered chocolate thing and a perfect quenelle of ice cream and a sprinkle of some dumb-ass powder and perfect cube of some gelée, I am going on a killing spree! Watch me. Ha-ha-ha.

I just can’t help getting psyched when real desserts get props. Ah. Don’t get me started on the MC Hammer-pantsness of NYC desserts. Not so anti-“modernist,” as I am anti-crummygelatinladenconformistcrap. Flavor first!”

You can check out the rest of his profile here.