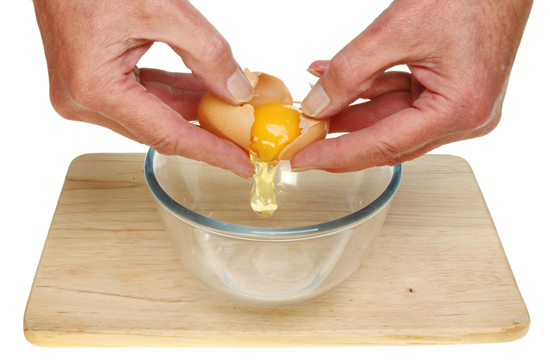 Fatherhood seems to be doing good things for Bryan “The Quiet One” Voltaggio, whose four restaurants could threaten to turn him into the Not Quiet One. But he remains preternaturally calm, even when faced with so-called “food writers” who audaciously walk into his kitchen without having ever cracked an egg in their 39 years of existence.

This actually happened, courtesy of GQ’s Chris Jones, who needs to be excommunicated immediately:

A few minutes before, when I was cutting those same cherry tomatoes in half, I told him he was witnessing my first time putting a knife to a vegetable. Not long after, he wondered aloud whether he was being set up as part of some elaborate prank. That’s when I mentioned I’d never cracked an egg. “How is that possible?” Voltaggio said. “How are you alive?”

I agreed that it was ridiculous for a thirty-nine-year-old man never to have cracked an egg, that it says something terrible about me as well as modern society that I can survive and in fact grow quite fat without acquiring even the most basic cooking skills, but nevertheless, I had never cracked an egg…Only after Voltaggio watched me nervously crack that first egg did he finally believe me. “Nobody’s that good an actor,” he said.

And then Voltaggio, against all odds, taught the guy how to make crab cakes and tartar sauce from scratch — well enough so Jones could do it again! St. Bryan, the patron saint of lost causes, everyone.