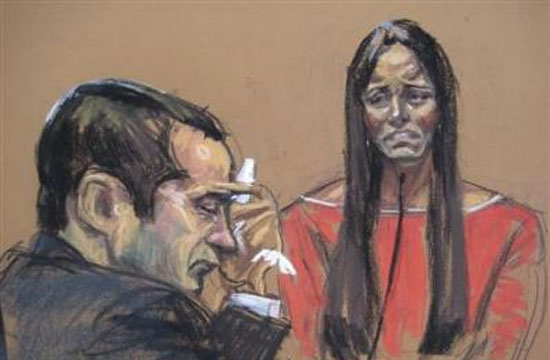 If that wasn’t enough to end a marriage right there, Mangan-Valle testified that she also found descriptions of what Valle and his internet cannibal friends wanted to do to her. According to the New York Times:

“I was going to be tied up by my feet and my throat slit, and they would have fun watching the blood gush out of me,” she said, sobbing repeatedly through her afternoon on the witness stand.

…When someone participating in the chat suggested to her husband that if she cried, “don’t listen to her, don’t give her mercy,” she testified, “Gil just said, ‘It’s O.K., we will just gag her.’ ”

Mangan-Valle went on to describe the content of the chats she found:

Two [women] were supposed to be “raped in front of each other to heighten” their fears, she said. Another was to be burned alive, she said. There was also talk about putting women on a spit, and cooking them for 30-minute shifts, so they could be tortured longer.

The prosecution argues that his thorough and vivid descriptions of the methods used to kidnap these women indicated that he was, in fact, planning to cannibalize them. And while there is, quite literally, a mountain of evidence proving otherwise, the defense plans on attempting to convince the jury that Valle had only been fantasizing.

We’ll go on record and say that no matter what, this is probably going to be the easiest divorce ever.