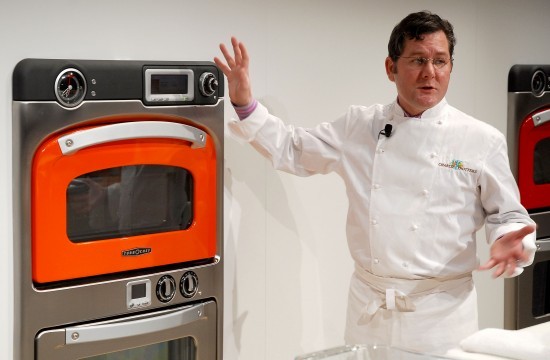 Last week, Charlie Trotter allegedly freaked out at a bunch of high school kids whom he’d invited to stage a photo gallery at his old restaurant, then locked them out without letting them retrieve their photos and cellphones, then woozily kind of threatened a group of reporters wondering what had happened.

On Friday, he explained his side of the story to DNAInfo, and it makes sense, in Trotter-logic.

In response to allegations that he demanded that the students clean up his restaurant, Trotter says he’d merely asked them to tidy up a bit instead of asking the kids to be his indentured servants.

“All I did was ask them to sweep some stuff up. Like, ‘Hey let’s get this ready. This is your show.’ The place is already pretty spotless,” Trotter told the site. “I think the instructor was thinking I was trying to take advantage of the students.”

Given that this is Charlie Trotter we’re talking about, though, what may have sounded like a polite request from him may have, to children, sounded like RAGE AND SCREAMING AND GET THAT GODDAMNED LEAF OUT OF MY RESTAURANT noises. (Charlie Trotter was never the most Zen of chefs.)

As for the incident with the camera crew, he only has this to say:

A frustrated Trotter said Friday he felt unfairly vilified, especially with the camera crew that surprised him Thursday night and more cameras camped outside his home and the restaurant Friday.

“That’s why Sean Penn and Alec Baldwin beat the crap out of the paparazzi. And I’m not even that famous. I’m not looking for trouble,” said Trotter, who said there were more important stories to cover. “Shouldn’t these guys be on the South Side looking at black-on-black crime?”

But black-on-black crime is depressing to cover and a hopelessly intractable social problem, whereas a chef freakout is fluffy and full of schadenfreude! Just a thought.