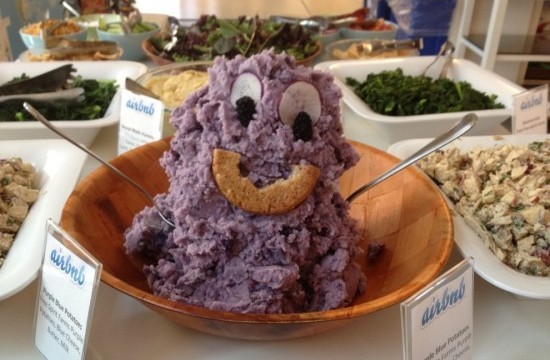 One of the greatest perks of working at enormous tech behemoths like Google, Facebook, and Zynga is the endless free gourmet food, and Buzzfeed got to sit down with the chefs responsible for turning out 800 covers of tempeh and filet mignon (and whatever else internet money can buy) per hour. How is it, they asked, catering to thousands of hungry nerds?

“For the last two days, I’ve been working the leftovers back into the menu,” said Sam Lippman, the San Francisco chef at AirBnB. “The luxury is that the menu changes every day and you’re not tied to certain things.” But: “Here, people expect it to be different.”

And while there’s something so pleasant about not having to worry about money, the desire to cook good food often screws over chefs at Silicon Valley companies, as one nameless Google chef described it:

If you wrote a menu that was really popular, you were packed. But it’s like, live by the sword, die by the sword. If you write a great menu, your labor force doesn’t change, your budget doesn’t change. You basically end up impaling yourself — putting out this knife and running into it by being good. If you make more food, you get more clients, you just make more work for yourself. It’s such a weird system. And you know, does it make the company happier? We would run out of food, have longer lines. The cafe is always a madhouse. It was time away from their desks, which decreases productivity.

You could kill yourself by simply putting a corn dog on the menu.

(Apple, tellingly, doesn’t have a free food program: “according to journalist Adam Lashinsky, who has written extensively about the company, it is emblematic of Apple being a ‘grown-up place.'” How very Steve Jobs.)