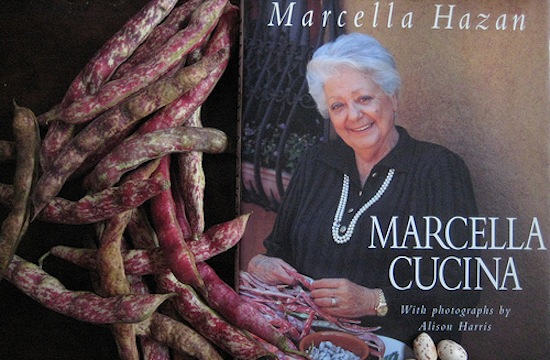 The food world lost a giant today, and chefs around the world mourned the death of cookbook author and “the Julia Child of Italian food,” Marcella Hazan, at age 90.

The news was confirmed by Hazan’s daughter-in-law, Lael Hazan, on Twitter.

The world of cooking has lost a giant today. My mother-in-law Marcella Hazan melted away peacefully, my father in law at her side.

As The New York Times noted in a 2008 interview, Marcella’s husband, Victor, was responsible for translating her classic Italian dishes and recipes into English. Hazan, credited with bringing authentic Italian cooking to America, wrote six cookbooks; her first, the standard for all Italian cooking, The Classic Italian Cook Book: The Art of Italian Cooking and the Italian Art of Eating, in 1973, and one memoir, Amarcord: Marcella Remembers.

The New York Times’ Mark Bittman was the first to Tweet the news; the floodgates opened for other celebrity chefs and the food world to remember Hazan’s contributions.

RIP Marcella Hazan, one of the true cooking greats in US history. Died this morning, Longboat Key, FL.

Very very sad to hear the passing of Marcella Hazan .My thoughts are with the her family . You touched my soul .RIP darling Marcella

In Italy w John for our anniversary & just heard the sad news Marcella Hazan has passed. We will remember her in our hearts & our food.

RIP, and God bless you, Marcella Hazan. Your books bridged a gap between my mother & I during very bad times. You continue to inspire me.

I met Marcella Hazan when I first started cooking and she made me obscenely buttered toast with fresh sardines. I'll never forget. RIP

A sad farewell to Marcella Hazan, whose books taught me more about happiness than those of any philosopher. Sit tibi terra levis.

Farewell to Marcella Hazan. Italian food in this country (and in so many others) would have been much less the poorer without her.

Marcella Hazan is survived by her husband, Victor, son Guiliano, and daughter-in-law, Lael.