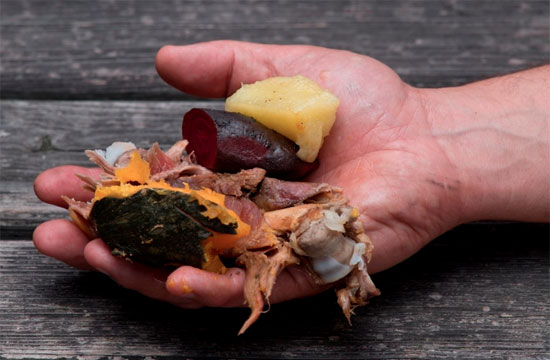 Cook It Raw, a Boy Scout camping trip for adult chefs, has turned itself into a book. In anticipation of its debut, The Guardian caught up with many of the chefs who’ve gone on the foraging and cooking adventure to ask what they’d cooked in the wild over the years (ostensibly, so they wouldn’t have to eat one another).

While many of the answers included things that one would normally find in the great outdoors (herbs, wild garlic, baby piglets torn from their mothers’ teats, etc), two answers were particularly mind-boggling: pollution and blood.

Here’s how London chef Claude Bosi described his dish, seemingly inspired by Lord Of The Flies:

It was at the Cook It Raw in Collio, Italy, that I drank raw blood for the first time. They slaughtered a pig in front of us, and the Italian chef Davide Scabin asked me: “Have you ever tasted blood?” I replied: “Get lost!” But he said: “Go on, try it.” So I had some and the flavour was just fantastic. I said: “Davide, I’m going to do a blood soup!” So I kept the blood and made my dish with it. At Cook It Raw, you never know what to expect. We served the blood in the evening, mixed with cream and served with local cockles. You could never recreate a dish like that: you do it once and it’s finished, never again.

Thankfully, Massimo Bottura’s 2009 dish “Pollution” was just a metaphor. Or was it?

Already 90% of large fish have disappeared from our seas and some scientists believe that by 2050 the waters will be so polluted that only the prehistoric creatures – squid, monkfish, jellyfish and algae – will be left. I wanted to create a dish just from these ingredients: it would serve as both a warning, but also a reminder that chefs need to adapt as well. The finished plate looked a little murky, like a dirty riverbank, which I think was shocking to people. But whoa, when you tasted it, it stung the palate. The world is changing, and we as chefs have to change with it.

Less shocking dishes can be found in the article below, but remember: they were not allowed to use any appliances save for a knife and fire, which makes a dish called “Pollution” a bit more impressive.