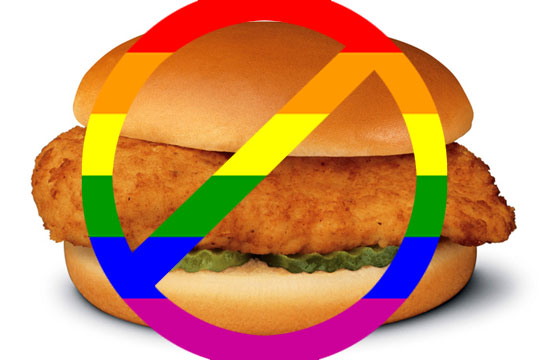 Regardless of what thoughts you have about Chick-fil-A’s CEO Dan Cathy and his admission that his company was against gay marriage, you have to admit that it sparked some serious opinions throughout the country, including some very prominent threats from celebrities like comedian Ed Helms, Michael Symon, and Art Smith, to stop eating at Chick-fil-A.  You’ll also have to admit that the corporation, at the end of the day, just wants to sell some fried chicken sandwiches, values be damned. (Capitalism at work!) However, they can’t really damn their values, since one of their selling points is their adherence to Christian values. Oh, they’re in such a bind!

So yesterday the company took to their Facebook page to make a non-apology apology to their customers:

The Chick-fil-A culture and service tradition in our restaurants is to treat every person with honor, dignity and respect –- regardless of their belief, race, creed, sexual orientation or gender. We will continue this tradition in the over 1,600 Restaurants run by independent Owner/Operators. Going forward, our intent is to leave the policy debate over same-sex marriage to the government and political arena.

However, they notably did not disavow the company’s Winshape Foundation, which donates millions of dollars to anti-gay groups like The Family Research Council, Focus On The Family, and the organization indirectly responsible for the phrase  “pray the gay away,” Exodus International. Basically, this means that yes, Chick-fil-A is still against gay marriage, but from now on, they’ll pay other people to say it instead of actually stating it themselves.