Chick-fil-A Waffles On Their Waffling, Claims They ‘Made No Concessions’ To Marriage Equality 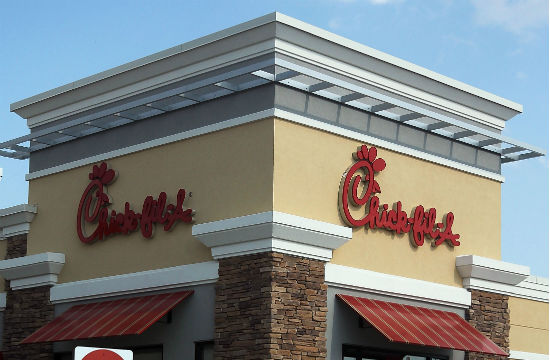 Okay, now we’re just confused. Remember how Chick-fil-A came out last week and quietly announced that they would pull all financial support of anti-gay groups in an effort to be accepted in the liberal market (in this particular case, Chicago)? And a bunch of people who were protesting them before were like, “Good for you guys! Chicken for all!” But a bunch of people who supported their anti-gay marriage position to begin with were like, “We hate you now, you waffling Anti-Christians giving in to the gay agenda and allowing the liberal media to turn you against God and his ways.” (We’re paraphrasing.)

Yeah, well, apparently, CEO Dan Cathy (who made the anti-gay “guilty as charged” comment in the first place, but whose name wasn’t associated with the announcement that they were backing off anti-gay funding) couldn’t take the heat from critics who were accusing the chicken chain of “caving in” on their Christian beliefs.

He took to Governor Mike Huckabee’s website to issue the following statement:

“There continues to be erroneous implications in the media that Chick-fil-A changed our practices and priorities in order to obtain permission for a new restaurant in Chicago. That is incorrect. Chick-fil-A made no such concessions, and we remain true to who we are and who we have been.”

If you recall, Huckabee is the one who declared Chick-fil-A Appreciation Day back in August in defense of Cathy’s original statements against gay marriage.

So, to be clear, the stance we’re going with here is: The Vague, Line-Toeing Position of Vaguery and Meaninglessness. Cool. Glad that one’s figured out. Uh, chicken for all?