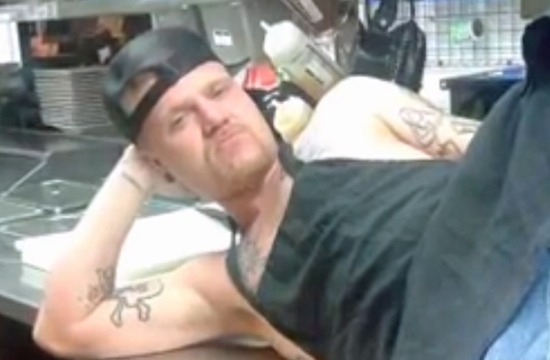 Because posing shirtless where you prepare food should maybe done in the privacy of your own home. If at all.

Nevertheless, the viral Chili’s cook who just had to take some sexy shirtless photos at his place of employment — and tagged the Chili’s on Facebook with the photos — is no longer employed there. Justin J Speekz is handling the publicity well (say, better than the kid who gave a tell-all about shtupping a Hot Pocket did), saying that “women n jobs come and go” on Facebook. (Truth, man.) And, according to Grubstreet, starting a hashtag campaign (#StandwithSteez) and an auction for an autographed apron — maybe the same one he was wearing in those sexy photos!! And of course, a sexy chef’s calendar from the chain, still forthcoming.

It’s all too much.

ABC Action News reports that the Chili’s in question still passed a surprise inspection after the photos were taken. Said Chili’s in a statement, “Chili’s clearly does not encourage this type of behavior in our restaurants. We maintain very high standards of food quality, safety and cleanliness and took immediate steps to ensure the restaurant continues to follow these requirements. Additionally, we ended this team member’s employment after learning of his conduct.”

RELATED: PHOTOS: Things We Learned While Searching For Nude Chefs On The Internet
Teen Who Schtupped a Hot Pocket Gives Tell-All, Can We Stop Violating Pastries Now?
We Took This Ridiculous E! Online Poll on the ‘Hottest Celebrity Chefs’ So You Don’t Have To