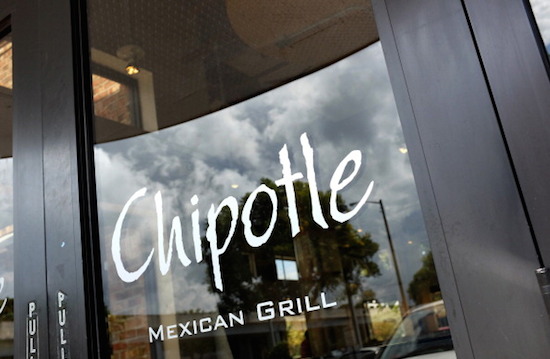 Taking on the man at Chipotle, hoo boy.

Grubstreet reports on a Chipotle location near Penn State University closing for a day, after employees left behind an epic f*ck-off kind of note. The note reads in part, “Want to know why we’re closed? Ask our corporate offices why their employees are forced to work in borderline sweatshop conditions. Almost the entire management and crew have resigned. People > profits.”

The former managers told student newspaper Onward State that minimal staff, about six to eight employees, were scheduled onto shifts that needed at least 13 to 14 people on staff. Said the manager to Onward State, “We just felt neglected … I’m not trying to take down the Chipotle corporation, I just want to see people treated better. We’re not trying to start a strike or anything like that.” Chipotle corporate responded to the newspaper with a statement, saying only “a few employees” quit, “locking out a majority of others who are enthusiastic to return to work.” Onward State noted the location was back up and running last night.

It’s tricky to know what’s actually going on here; Chipotle is famously highlighted as one of the fast-food chains to pay their employees a living wage. From Business Insider last year:

Chipotle is renowned for quickly moving workers from starting pay levels into higher paying management jobs. Starting pay for “crew,” the people who make the burritos, averages about $10.50 an hour ($21,000 a year) with benefits, according to some reports; $8.50 an hour by others. The company says 98% of its managers, some of whom earn six-digits, start as crew. It’s not unheard of to find a 20-something who was on the line five years ago to be working as a Chipotle “restaurateur,” a position with an average annual pay of about $99,000.

Those numbers conflict a bit with the anonymous salaries posted on Glassdoor, and a Reddit AMA all about Chipotle (making us hungry more than anything). When a Redditor asked whether the $99,000 pay range was actually true, one Chipotle employee replied:

Sort of true. There are a lot of different types of managers. Kitchen managers, service managers, apprentice, GM, Restauranteur. Apprentice and up are salaried, others are hourly. It might say the Apprentice makes something like 60k, GM 80k, Restauranteur 100k. But honestly they include all these arbitrary figures in those numbers, certain types of insurance coverage that nobody really cares about, they’ll pay for certain classes that you’re required, by Chipotle, to take. All of that gets factored in, the reality is a GM may be advertised as an $80k position, but really they make about $35k a year in take-home funds.

And of course, none of this actually relates to working conditions at Chipotle. Still, with so much going on worldwide with global fast food worker strikes, not even Chipotle can keep out of the spotlight for much longer.