Chipotle is Your Irritating and Desperate Ex 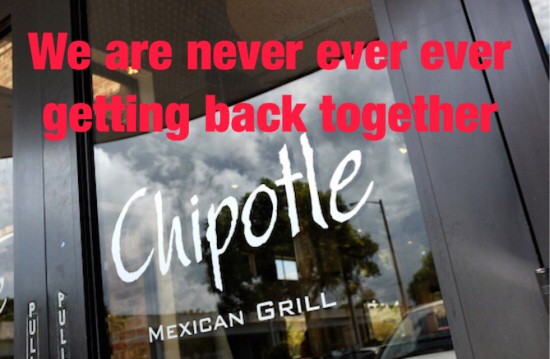 Chipotle gave you E. Coli, and norovirus and salmonella. Or even if it didn’t, it gave it to some friends, or some people you vaguely know. Or some people you don’t know at all, but it’s still totally gross, off-putting and scary. And the stock price plummeted; it dropped 40% last year, and sales were down 30%. If no one else is eating it, you don’t want it either. And then, they decided to ditch everything you liked about them in the first place. They’re going to be slicing cheese and tomatoes in central kitchens. It’s possible that their policy on local food will change.

You were done. The whole point of Chipotle was that you knew what you were getting, and that it was healthier for you than the competition, but you’d take the calories, fat, and sodium, and whatever else is in a Big Mac ten times out of ten over E. Coli.  There are plenty of other fast-casual restaurants, and certainly more will open this year. Chipotle lost your trust. “Food with Integrity” means nothing to you.

Now, Chipotle is trying to win you back with free food. And at first it was cute. Lots of coffee shops and restaurant chains allot a budget for free items to be given to customers at the employees’ discretion. Try being extra nice to your barista next time you’re at Pret A Manger, and see how you make out. Chipotle has now doubled their budget for free food. But this won’t work. You could give me a free burrito plus $10, and I’m still not going to eat it if I don’t trust you.

On February 7th, Chipotle is pulling out the big guns. They really, really want you back. As AdAge reported, they’re offering $50 to the first 1,500 catering or “Burritos by the Box” orders for 20 or more people for the Super Bowl. This is a total bummer and a turn off, not only to you but to all of your friends. If you bring your ex, Chipotle to the party, people will be weirded out. Did you have to do that? You could have just ordered pizza.

Chipotle can’t win you back by paying for your dinners, because it doesn’t solve the core problem. You didn’t dump Chipotle because of the financial aspect. Not even the $2 extra-for-guacamole piece of it. You broke up with Chipotle because it’s literally dangerous to eat there.

The only way for Chipotle to win its customers back is to make sure its food is safe. Until then, the free food rings desperate. I’ll stick with wings at my Super Bowl party, but thanks anyway!