Chipotle Prints Real Literature on Cups and Bags to Alleviate Boredom, Make You A Better Person

Chipotle Prints Real Literature on Cups and Bags to Alleviate Boredom, Make You A Better Person 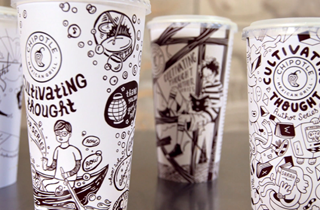 Ever wanted to feel intellectually superior when eating at Chipotle and you’ve forgotten your copy of Freakonomics? Now you can, just by staring at the back of your disposable cup! Thanks to Jonathan Safran Foer being bored one day at Chipotle, you now have the chance to read essays and short stories written by some of America’s prominent writers, essayists, and thoughtleaders, printed on your cups and bags.

Foer really was bored, he told Vanity Fair, and found himself sitting in a Chipotle with nothing but a burrito and the furious buzz of his thoughts, and needed a distraction:

What if there were something truly good to read on his Chipotle cup? Or the bag? A few years earlier, he had met Steve Ells, Chipotle’s C.E.O., so he decided to write the executive an e-mail. “I said, ‘I bet a shitload of people go into your restaurants every day, and I bet some of them have very similar experiences, and even if they didn’t have that negative experience, they could have a positive experience if they had access to some kind of interesting text,’” Foer recalled. “And unlike McDonald’s, it’s not like they’re selling their surfaces to the highest bidder. They had nothing on their bags. So I said, ‘Wouldn’t it be cool to just put some interesting stuff on it? Get really high-quality writers of different kinds, creating texts of different kinds that you just give to your customers as a service.’”

So if you’ve never heard of Malcolm Gladwell, Sarah Silverman, or Toni Morrison (and many other writers), now’s the chance to educate yourself with Foer’s brainchild, “Cultivating Thought.” Be a better person. Eat that free-range burrito. Read that essay by neurologist Steven Pinker.