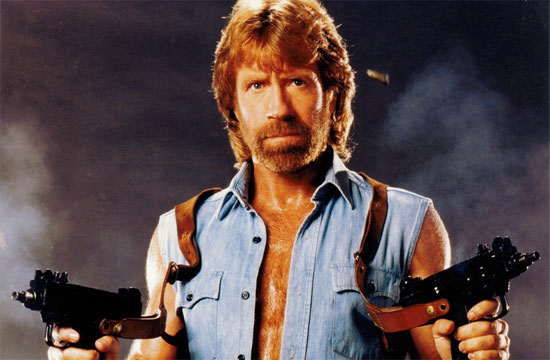 Another country heard from in regards to the GMO debate! A country…called Chuck Norris.

On the conservative news site World Net Daily, the former Walker, Texas Ranger star and conservative Jesus figure penned an op-ed in response to the growing controversy over genetically modified organisms (GMOs)in the food supply  — and came out firmly against the concept. “If this column and the next don’t get you to eat organic,” he wrote (slash growled), “nothing will.”

Though he stops short of calling for government-mandated labeling, Norris remains a strict anti-fan of eating GMOs, especially if he doesn’t know that he’s eating them, citing studies arguing that “because genetically modified organisms are not listed on food or ingredient labels, few Americans realize they’re eating GMO foods every day…[foods which] eventually could warrant stronger and more intense pesticides in order to outwit and overcome superbugs and greater strains of diseases.”

To really underscore how Big Of A Deal this op-ed is, consider this ABC poll that found that Republicans are evenly split over whether they consider GMO foods to be dangerous, compared to their ideological peers: “Independents rate them unsafe by a 20-point margin; Democrats, by a 26-point margin.” Overall, “barely more than a third of the public believes that genetically modified foods are safe to eat,” and a whopping 93% of respondents are in favor of government labeling. Now, granted, the acceptance (or fear) of genetically modified foods straddles both sides of the aisle, but this is the first we’ve heard of a conservative public figure — even one as minor as Chuck Norris (though major in his punching abilities) — taking a hard stance on the matter.