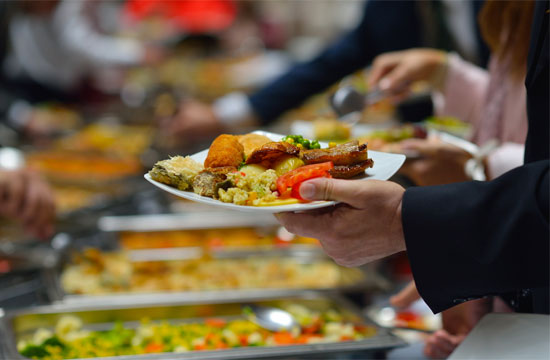 A Saudi cleric recently declared a religious edict, or fatwa, against that the concept of all-you-can-eat buffets, and admonished followers of Islam to avoid buffets because it “violated Sharia law.”

According to al-Arabiya, the cleric, Saleh al-Fawzan, claimed that buffets are bad not because they encourage overeating, or even because the food might be terrible and non-halal (or something), but because “the value and quantity of what is sold should be pre-determined before it is purchased.”

“Whoever enters the buffet and eats for 10 or 50 riyals without deciding the quantity they will eat is violating Sharia (Islamic) law,” he proclaimed on a state-owned religious TV network.

Technically, he’s right: sharia law actually has strict requirements on sales transactions, one of them being that the value of goods must be declared before the transaction takes place. Nevertheless, the specificity of this edict prompted internet users across the Middle East to lose their minds:

Using the Twitter hashtag “prohibiting-open-buffet” (in Arabic), some of the site’s users criticized Fawzan’s fatwa.
“Restaurants will be ruined if they didn’t quantify the food they sold. This negates the sheikh’s premise that the quantity is unknown,” said on Twitter user.
“This is not Quran just a mere fatwa, if you want to follow it, you are a free man but you can not impose it on others,” wrote another.
One user sarcastically wrote: “Congratulations! Open buffets have made it in the list for what is forbidden for us.”

We’re kind of sad we didn’t come up with this one, however:

Should be called a “Thinwa!” “@askeaton_dan: “@HuffPost: Saudi Cleric issues Fatwa against All You Can Eat Buffets http://t.co/jyjSxWCLYI”