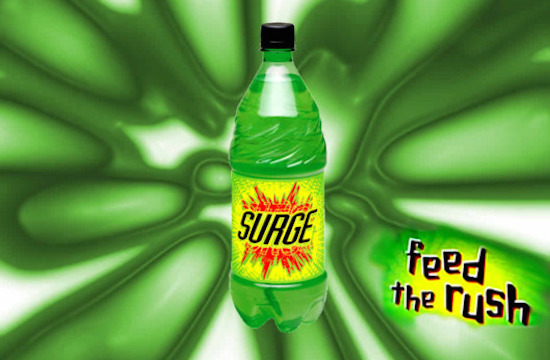 When soda sales flatline, bring back the neon good stuff!

Coca-Cola made children of the 90s extremely happy by announcing the re-release of Surge soda, last on shelves in 2003. Thanks to the lovable weirdos on the Internet, including one such group called the “Surge Movement,” Coca-Cola listened to its customers and brought back the soda everyone was still dying to drink, we guess? “Surge, which debuted in 1996 and was taken off the market in the early 2000s, is making a comeback thanks, in part, to a passionate and persistent community of brand loyalists who have been lobbying The Coca-Cola Company to bring back their favorite drink over the last few years,” said Coca-Cola in a press release. “Surge is Coke’s first discontinued brand to return to the market.”

Blogs like Grubstreet are calling the re-release “random,” but it seems to fall in line with Coca-Cola’s strategy at the moment: use any marketing means necessary to get we health-crazed Americans buying soda again. Media reports show that even despite growth in the global market, soda sales in North America are still flatlining. Why? No one wants diet soda anymore, either, a sad fact for Coca-Cola and the like. Despite all that, Coca-Cola is still pouring millions into marketing — a tactic that’s had meh results thus far. From the Wall Street Journal earlier this summer:

With soda consumption declining, the beverage giant has reworked its marketing strategy, which now includes the social-media friendly “Share a Coke” campaign. Analysts had said they expected the moves to pay off in the second quarter with higher volumes.

But it didn’t, really. Soda sales worldwide saw a bit of a bump, but the company still faced profit losses in the second quarter. But hey, maybe Surge will do the trick: it’s already sold out once and come back on Amazon overnight. Basically, Coca-Cola is hoping this kind of brand loyalty will pay off. Look at the passive aggressive language of “hey, it’s up to you guys whether or not we keep this sh*t around!” used by Coca-Cola; from a press release:

“This is the ultimate test… we’re leaving it in the hands of SURGE fans,” [associate vice president of sparkling waters, Racquel] Mason adds. “Can 128,000 fans build and sustain a brand? We’ll see.”

“Future plans for the brand will depend on the level of excitement exhibited by fans across the country,” Wendy Clark, president of sparkling and strategic marketing for Coca-Cola North America, said in the statement.

So hey, let’s all guzzle some Surge to bring Coca-Cola and its competition back to the soda heyday of the 90s! It’s not like we know the long-term effects soda has on our health or anything.

RELATED: WATCH: California Takes Steps To Add Warning Labels to Soda and Sugary Drinks
Diet Soda Sales Plummet in 2013 Due to Health Concerns; No One Told Us And Now We’re Freaking Out