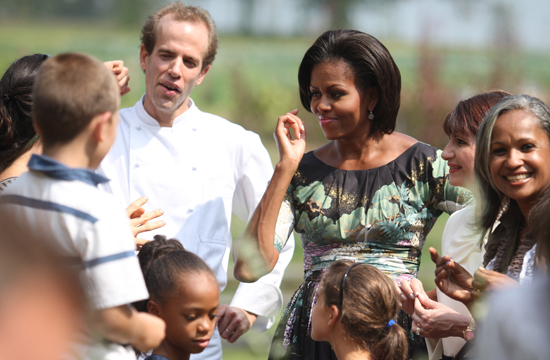 What on earth does Dan Barber do to his vegetables? Because according to Michelle Obama, they were so mind-blowingly amazing the first time she ate them, that she immediately appointed him to the President’s Council on Fitness, Sports and Nutrition. He’s the only chef on the council, by the way, so those vegetables had to be freaking ridiculous.

Mrs. Obama, who was speaking at a fundraising brunch at Barber’s Blue Hill at Stone Barns this weekend, lauded the chef for his commitment to the growing and eating fresh foods and teaching Americans the virtues of gardening. But the reason that she valued that commitment, she said, was because Barber could make people — even her, in the midst of a pizza-filled 2008 campaign — want to eat vegetables:

Dan always underplays the role that he’s — he had in all the work that I’ve been doing with the garden, with obesity. Because truly, he was probably one of the first people who has been in this movement who I connected with. [The Obama family’s longtime personal chef] Sam Kass, we mentioned, actually talks so — spoke so highly of Dan that actually he flew out to our home in Chicago in the midst of the campaign and cooked a meal for us. He brought vegetables and pork and all that stuff he does out here, and he cooked for me and Barack. And I had never tasted vegetables that were so fresh and so delicious and so simply created.

And I knew then and there that if, as he put it, if more people understood what good food tastes like that they would demand it, and I knew that this could work because if places like Blue Hill and all the work that’s going — been going on around the country were known and shared by more people in this country, then we’d be in a better place. So I want to thank Dan for being among the many who have laid the foundation, and have been doing the work long before anybody knew who Michelle Obama was.