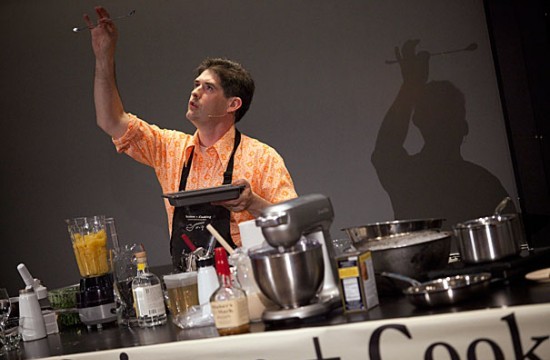 Do you live in the Boston area? Wanna hear something really awesome? Harvard University just released the schedule for this year’s “Science and Cooking” Public Lecture Series. In its third year, it features most of the coolest chefs you know, from David Chang to Ferran Adria. And it’s free. And it’s open to the public. And there’s Jose Andres, too, if you weren’t already convinced.

But your pants need not be fancy in order to attend, nor do you have to be one of the 5.9% of applicants accepted to Harvard this year. Literally anyone can attend, from the true gourmands of Boston noshing at No. 9 Park, to the greasy, spukie-eating hobos of Allston. Seating is first-come, first-serve (except for the Adria lecture, for obvious “father of modern molecular gastronomy” reasons).

Last Tuesday, Booker and Dax’s Dave Arnold kicked off the lecture series with a demonstration of dragon’s beard, a type of hand-pulled cotton candy, as well as a paean to the multiple ways one can cook an egg. But the most useful thing we got out of it? How to use agar agar to make orange-flavored whipped cream: “Normally, when citrus is added to dairy, curdling happens. But agar agar prevents that reaction, as Arnold demonstrated with an orange-flavored whipped cream.”

We also believe that someone at the Harvard Gazette has a tiny crush on Arnold, based solely on the following graf:

Arnold is as adorably mischievous as Ferris Bueller and talks as fast as a car salesman. The rapt crowd laughed equally upon hearing his mix of scientific jargon and original Arnoldisms.

Gazette writer Sarah Sweeney, did you dip your head into an immersion circulator? Because your face is quite red.