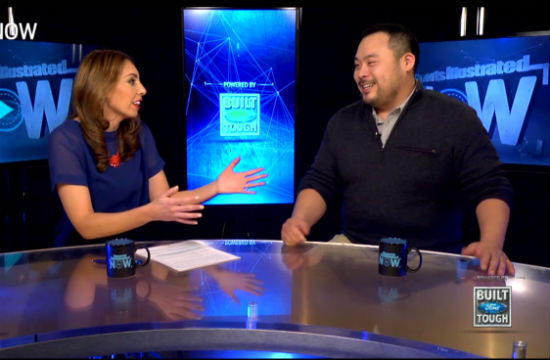 We don’t have a sports writer here (shocker), so we’re not super clear on what the current journalistic practice is in re: Washington DC’s casually racist team name. We do, however, know that it’s A Thing, so we’re gonna asterisk out for now to cover our asses. Because genocide makes us sad, in general.

So, David Chang is from the DC area and, as it turns out, he has a lot of feelings about R*dskins owner Dan Snyder (as more than one DC native we know does). He stopped by SI Now earlier today to give us prime chef-sports analysis on his hometeam:

“If you’re a R*dskins fan, it’s a religion. And it’s the only thing that really matters. No one cares about politics, it’s the R*dskins. It’s the only sport that matters. And when I grew up, we were really good! ’82? We won three Super Bowls! And it was almost every year you expected to win a Super Bowl, and it wasn’t out of the question. And then Daniel Snyder bought the team in ’99. And then everything changed. And it’s never been the same since.”

Now you know exactly one fact about football to impress your family with at Christmas! Check out the clip below to hear more about how Chang wants to raise $6 billion on Kickstarter to buy the Skins out from under Dan Snyder.

RELATED:
And Now Tailgating at MetLife Stadium for the Super Bowl is Out Too
WATCH: Ted Allen And The NFL Make Strange Bedfellows, And Feed The Hungry
Americans Spend Enough On Super Bowl Snacks To Solve Global Reproductive Health Crisis