David Nayfeld Is Such A Danny Meyer Alumnus: ‘I Believe In The Platinum Rule, Treat Everybody How They Want To Be Treated’ 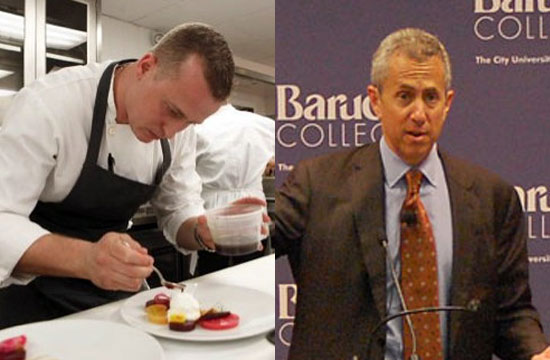 David Nayfield’s cooked in some of the best restaurants in the world (Nobu! Aqua! Some Joël Robuchon places!), and will soon open his own restaurant in downtown Los Angeles. As a debut of sorts, he’s doing a six-course dinner with Michael “Don’t Touch My Smoldering Face With Your Bare Hands” Voltaggio at .ink; and as a press debut for reals, he did an interview with LA Weekly about his inspirations — namely, one Eleven Madison Park. Long story short: he’s gonna have the bestest, nicest service and team ever.

“I was at Eleven Madison Park for about three and a half to four years,” he told the magazine. “I took every chance to go to the Union Square Hospitality main office for classes on everything from new management to empathy. I have such a high level of respect for Danny that it’s not hard not to want to mimic exactly how he deals with people. He along with Daniel Humm and Will Guidara are three truly huge influences on me.”

This also might mean that Nayfield will somehow compile every single detail about your habits and past orders — but trust us, it will end up in some pretty damn good service. Here’s how he summarized his own philosophy of service:

Rather than going the golden rule of treat everybody how you want to be treated, I believe in the platinum rule, treat everybody how they want to be treated…One of the things that I preach, for lack of a better word, to my team is that there is a difference between empathy and sympathy. Nobody wants you to feel bad for them. The world needs everyone to ask ‘How would I feel if I was in that situation?’

That starts in a number of ways, like the initial phone call. It’s about reading people and what it is they’re coming for. People offer a lot of information just by the way they speak to you. If it’s something like a 20-year anniversary, maybe we do something like start them off with sparkling wine as a gift from. If people are coming in for a business meeting, maybe they want us to give a little more space. As service professionals, we’re part expediters, part therapists, and part friends. Our job is to gauge what kind of service you’re looking for.

The teachings of the wise man hath spread beyond Union Square.

Danny Meyer’s Union Square Hospitality Group Is The Google Analytics Of Restaurant Groups
The Perils Of A Young Chef Skipping The Line To Celebrity
WATCH: Danny Meyer Documentary, The Restaurateur, To Air Tonight On PBS