Racial Coding at the Harlem Eat Up! Festival 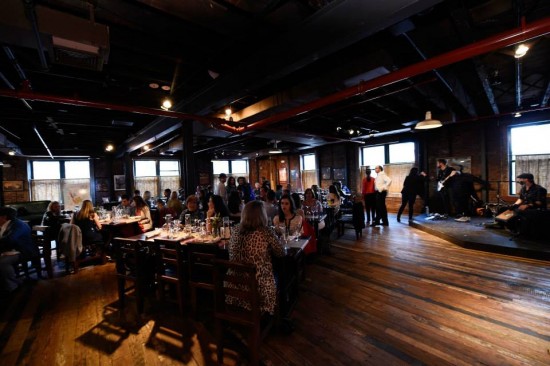 The picture splashed on the home page for Marcus Samuelsson‘s Harlem Eat Up! festival shows a white woman and black man clinking wine glasses in a room full of white faces, and such an imbalance wasn’t that far off when we dined at Ludo Lefebvre‘s dinner at Dinosaur Bar-B-Que on Friday night.

Downstairs, the barbecue joint’s main dining room was bustling, a crowd of locals were lined up waiting to be seated, while upstairs the only two black diners at the edge of our communal table were surprised more of the neighborhood didn’t come out for the 125th Street feast of gumbo, fried chicken, and porchetta. They attributed the problem to the festival’s focus on luring outsiders uptown. But in reality the restaurant was integrated, with whites just a small minority upstairs. So how could an evening celebrating Harlem’s dining culture feel so segregated, and what could’ve been done to overcome it?

That’s a topic Washingtonian restaurant critic Todd Kliman touches on in the Spring issue of Oxford American. Curious why he saw so few black faces in the restaurants where he dined, despite Washington DC’s immersive black culture, he wanted answers why more blacks weren’t dining out. What he discovered is a restaurateur obsession with the 60/40 rule.

I said I thought that might be just a tad paranoid. This one restaurateur, a good, well-meaning man—they were all good, well-meaning men, the men I spoke with—looked at me and said that you could never be too careful when it came to running a business where every day you essentially began from scratch. But 60–40 would seem to me to be a problem to think about only if you have a 40 percent black audience. And there aren’t more than a handful of restaurants in the city that can say that.

So is that why the event was held upstairs, through a separate entrance around the corner from the main dining room? To make both crowds feel more comfortable? And could black diners have been turned off buying tickets to a barbecue dinner incorporating wine pairings, a rock band, and a French chef’s fancy crudite? Kliman calls that coding:

It was a man named Andy Shallal who helped me to understand the possibilities for a better, more integrated future while also reinforcing the manifold problems of the present. Shallal made me understand that no one ever need say, “keep out.” That a message is embedded in the room, in the menu, in the plates and silverware, in the music, in the color scheme. That a restaurant is a network of codes. It’s a phrase that, yes, has all sorts of overtones and undertones, still, in the South. I’m using it, here, in the semiotic sense—the communication by signs and symbols and patterns.

I don’t see coding as inherently malicious. But we need to remember that restaurants have long existed to perpetuate a class of insiders and a class of outsiders, the better to cultivate an air of desirability. Tablecloths, waiters in jackets and ties, soft music—these are all forms of code. They all send a very specific, clear message. That is, they communicate without words (and so without incurring a legal risk or inviting criticism or censure from the public) the policy, the philosophy, the aim of the establishment.

Today, there are many more forms of code than the old codes of the aristocracy. Bass-thumping music. Cement floors and lights dangling from the ceiling. Tattooed cooks. But these are still forms of code. They simultaneously send an unmistakable signal to the target audience and repel all those who fall outside that desired group.